It's one thing for a musician to say they listen to everything, but its quite a rare thing to actually HEAR such diversity of style in a single artist's catalogue. Fewer still manage to display that diversity in a personal era, or a single album. With Nicolas Meier, you're likely to hear multi-styles executed flawlessly and authentically in a single song.

Nicolas displays a stunning chops skill set matched only by his ability to compose with a depth and breadth that is nothing short of awe-inspiring.

Nicolas - who attended Switzerland's prestigious Conservatoire de Fribourg and attended Boston's Berklee College of Music - has written 2 books, appeared on some 20 albums, and toured the world as 2nd guitar in the Jeff Beck Group.

You can visit him on-line at his WEBSITE to learn more, hear music, read the full bio, see/hear video, and much more!

I had a chance to chat with Nicolas recently. Check it out!

I have a few current projects, first my own group, the Nicolas Meier Group. I keep developing my composition in world-Jazz with my group which can change in size., from trio (guitar, percussions, bass) I can add, violin, drums and piano. I did a lot of concerts for my last few albums including, "Kismet" and "From Istanbul to Ceuta with a Smile", and now I just released a new album called "Infinity" featuring Vinnie Colaiuta on drums, Jimmy Haslip on bass and 3 violinist players (Richard Jones, Lizzie Ball and Sally Jo). The album was out last November 2016 on Favored Nations which I am very pleased.

I also have a guitar project with UK guitarist Pete Oxley: Oxley-Meier Guitar Project, we just released a double album (duo and quartet) on my label MGP Records.

I also play with Belgium singer Gabrielle Ducomble. We play some french songs (Edith Piaf, Brel… and some Piazzola) all in a modern way.

I had the chance to play with Indonesian pianist Dwiki Dharmawan. We made an album called "Pasar Kever" and we played a few times in Indonesia. And I still run my metal band Seven7. We made our third album "The Follower" 2 years ago, so now it's time to think of the next one. 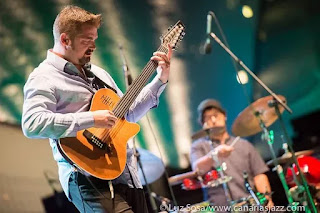 Well, with my group, the guitar project and Seven7, I have these bands for long time, so it's not that things differ, but more like a progression… I like to write new music, from past experiences, meeting people, musician, go to different places. Then present the music, see the reaction, and then progress with new ideas, new music and new flavors… with my group, playing my material with Vinnie and Jimmy has been a new and fantastic experience. See how heavy weight musician feel about what I write. With Pete Oxley we are developing the guitar duo and making it always a stinger show.

Well in my group, The Nicolas Meier Group, it's probably the most personal and closer to my heart, as I write, develop the music and then I can shape it with fantastic players. I try to constantly develop my sound and my approach to improvisation, trying to tell stories.

I am a Godin Guitar fan, and the company really help me too.

My main guitar is the Multiac Nylon string. but I use, the glissentar, the steel string, the fretless, the 12 string, the jazz guitar (5th Avenue) and then also the LGXT electric guitar. I use 2 AER amp (stereo sound) and use a few Strymon pedals to get a good clean sound. Delay, Reverb, Chorus, Volume. on my bigger pedal board I use the Wha, and 2 distortions, Klon and King of Tone.
In the studio I mic the guitar and one of the amp.

So many as I am interested in many genres. 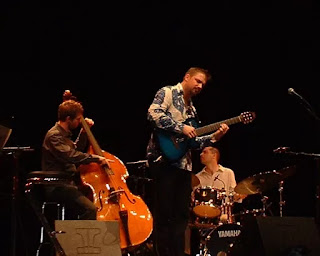 Learn from the great then find your way!!!! Whatever is personal to you. Practice many styles!!!


7) After studying guitar at Conservatoire de Fribourg (Switzerland), you were granted a scholarship to the Bekrlee College of Music (USA). What years did you attend Berklee, and what was the biggest impact studying there had on your playing?

I was at Berklee between 1995-1998. It was a wonderful environment. Lots of great students to play and jam with from some many different background. And so many great tutors to chose from in Guitar, Composition, Arrangements etc.

The School give me a strong focus on Jazz in general but then I was able to develop all the other styles I got into. I could develop my writing and put band together to play the music.


8) You have written "Heavy Metal, Part I: Rhythm Guitar," and; "Jazz, Part I: Chord Tones." Are there any more books - or other types of instructional material - in the works?

I wrote these articles just after I finished Berklee. As I was getting into making a living as a musician and was trying also different ideas, so I had a friend who asked my to write some music articles for his websites, so that's what I did.


9) So, you relocated to London some years back. Does the geographical differences between your home in Switzerland, Boston, MA, and London impact your music in any way? 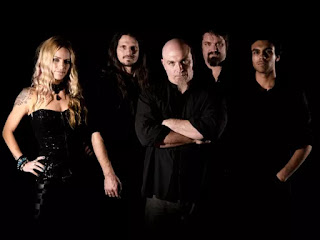 Yes each places are great and I learn from them. I studied in the conservatoire in Switzerland, had very supportive teachers (Francis Coletta on guitar, Max Jendly on arrangement, ensemble playing and Big Band). I was then ready to go to study at Berklee and could l work on developing all my different skills and interests.

The I felt I needed a place which had a European vibe with the "drive" I found in Boston, that's why I move to London.


10) You have been, for a couple of years, a part of Jeff Beck's band. Can you tell us a little about what its like working with Jeff?

Yes I had the wonderful experience to be playing with Jeff Beck for 3 years! Playing with a musician/guitarist who always try to push himself with his productions and with his guitar playing has been very enriching and exciting! He was also interested to the music I write with an oriental sound. So we played my compositions "Yemin" everyone night and a few other pieces. I was playing Nylon string guitar, 12 string guitar, then with my electric guitar I could have 3 different sounds to complement Jeff: the electric guitar sound obviously, going through pedals and then Marshall, them using the piezzo pickups going through my stereo sound, and then I was triggering midi sounds from my Roland synth pedal board!
And playing to a wider audience has been very exciting!

With the guitar project with Pete Oxley we are on our first 35 dates tour to promote it. It will a be a few more tours.

I will also promote "Infinity" with my group over the next 2 years and I have a very exciting Europe tour in October 2017. I will be playing with an very exciting guitarist from Indonesian who also just released his album on Favored Nations. His name is Dewa Budjana and his is very well known in Asia. So we will have a very world-jazz set and the line-up will include Jimmy Haslip on bass, my drummer Asaf Sirkis, and Dewa bamboo flutist Saat Syah.