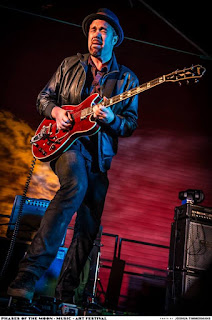 Eric Krasno is a name I've just stumbled upon, but the guy has been around the block more than once. Taking a look at his accomplishments I'm scratching my head and asking "How did I not already know this guy by name?"....though we've ALL heard his work in one way or another.

He's been on stages and studios around the world and worked with the likes of Lettuce (a band he co-founded), Norah Jones, 50 Cent, Aaron Neville, and so many more, and winning Grammy Awards and other honors as a sideman, songwriter, and producer.

Now he has released his new solo album, "Blood from a Stone", where he not only writes and plays guitar, but for the first time is featured vocalist.

Born & raised in the New York area, Krasno attended Berklee College of Music, then later transferred to Hampshire College, and very quickly found himself on the road and recording for Soulive, and shortly thereafter making his debut as a producer with Talib Kweli's 2002 debut record "Quality".

Eric is a fantastic songwriter, a soulful player, a great singer, and his production skills are top-flight. Time to dig into this guy's sonic history if you haven;t already!

You can learn more about this amazing musician at his web-site.

I had a chance to chat with Eric recently. Check it out!
Read more »
Posted by Skinny Devil at 08:44 No comments: