It's probably fair to say that Tonya Kay is currently best known for her appearance as "Creature" on the TV show "Who Wants to be a Super Hero" (Sci-Fi Network) or NBC's "America's Got Talent". Or perhaps it's due to 3 years with STOMP or touring as a dancer with Panic at the Disco. Or maybe it's the recent appearance in the Trace Adkins music video for his song "I Got My Game On" or in the Progressive Auto Insurance TV commercials as a gremlin. 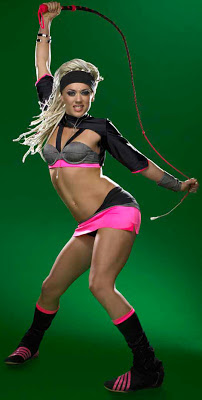 Or perhaps you've not heard of Tonya at all, but suddenly realize that you've seen her everywhere.

Tonya Kay is a fascinating woman. Dancer, musician, stunt-woman, actress, writer, director, producer, environmental activist...the list goes on. To sum it up, she is a one-woman cyclone of creativity, always at the brink and always in motion, boldly dancing at the chaotic but cutting edge of art.

It begins years ago when this 4 year old little girl from southern Michigan started taking tap dance. She spent a few years doing local musical theater and then, at the ripe old age of 15, snagged her first professional gig in Detroit, performing in "The Music Man" (and still managed to be valedictorian of her class). She hasn't stopped moving since. In addition to the above-listed credits, Tonya toured with country music legend Kenny Rogers, danced with the Broadway production of the Rugrats, wrote & directed Xtreme Rhythm Theatre to rave reviews, Mark Goodman's Tap Company (LA), played "NitroGrl" in the CBS show "NUMB3RS", a stint with Deca Dance Hip-Hop Theatre (NYC), the favorite "target" of knife-thrower Jack Dagger, internet-TV host, popped up in a Rob Zombie video, has been seen across the country cracking whips, flag dancing, & stilt-walking, produced an instructional video "How to Spin Poi with Tonya Kay", and much, much more.

A vegan since her teens and now well-known in raw foodist circles, Ms. Kay is a practicing pagan (& Chaote) and environmental activist who drives a modified car (2001 Jetta) that runs on waste vegetable oil. A prolific writer, Tonya has written almost as many articles/essays as she has been the subject of, on topics ranging from raw food to spirituality to environmental concerns to dance to health to teenage obesity to marketing.

She carved out a bit of time to chat. Below is part one of our 2-part interview. Afterwards, be sure to check out her official home on the web: www.TonyaKay.Com !