World premiere of the blues/gospel classic "John the Revelator" by Steve Vai from his soon-to-be-released new album: 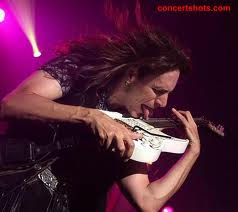 http://www.rollingstone.com/music/news/song-premiere-steve-vai-john-the-revelator-20120724
Posted by Skinny Devil at 06:52 No comments:

I use music to feed my soul to paint mixed media compositions while I am writing and revising poems. I am not a musician, but I am an avid fan and go to as many live shows as I can. I also attend poetry readings, art gallery shows and the theater. To commit to a creative life assumes the understanding that all genres of art are symbiotic. They are interdependent. 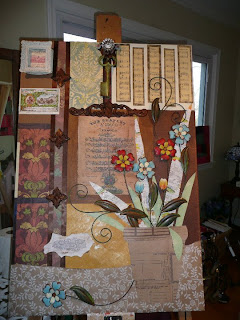 Artists must consume as well as express. It is inherent to our work to be well-read, to watch films, to listen to music, to study art in order to create our own work. Otherwise, we are doing ourselves a huge disservice, as well as to our audience and to our work. In terms of symbiosis as it relates to aesthetics, there are two different aspects: an external and an internal dynamic. Within the internal relationship, there are three parts: the artist's intention; the artwork itself and the audience.

"Isn't it a Funny World Nowadays?" by Caitlyn Waltermire
part 3 of 3 installments - read PART ONE and PART TWO


5:
The waitress Albert remembered stood next to him. She smelled like a sack that held onions; a sack that had gotten very wet then dried miserably crumpled on itself. It was not altogether terrible. Anything rustic was hard to find those days; it was too quickly swept up. No one had reason to exert anymore, so the only sweat anyone ever smelled was streaked with psychedelic drug, frantic and purple and metallic. It all smelled metallic. Albert wondered when he had last gathered a handful of dirt, and was gruffly embarrassed to realize he needed to do it.

“What can I get you?” she asked with nothing like recognition. She held a portable order-taker and wore the ugliest shoes Albert had ever seen. 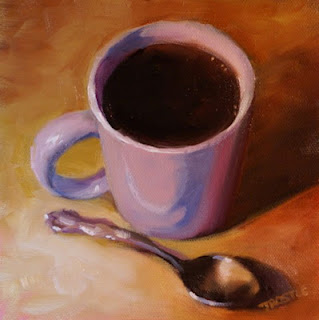 “Just coffee.” He expected he would have to run a napkin along the mug’s rim before drinking from it. Anger lapped wearily at the dish-washers for being so unapologetically mediocre at their sole programmed purpose.

Her fingers entered the order without her eyes leaving him, but their surfaces reflected every detail of the restaurant in minute entirety, so it was difficult to tell which part of him she was looking at; it appeared to be his left shoulder. “Cream and sugar?”

When the package arrived from the mail, it was totally unexpected. When I opened it, it revealed the new release by Mattias Eklundh (you can read my December 2004 "Guitar Gods" interview with him HERE). Naturally, I ripped the plastic from it as I dashed to the CD deck. 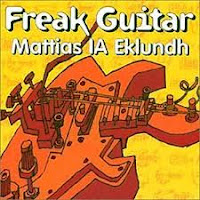 If you haven't heard of Mattias "Freak Guitar" Eklundh, you are missing out on some of the best guitar-centric music on the planet. Unreal sounds pour forth in a frothy, frantic, bubbling stew of sound guaranteed to stun you at every turn. The new release, "Freak Guitar - The Road Less Traveled" (Favored Nations, 2005) is no exception. In fact, it may well be his best work yet.

The tragedy of Jason Becker often overshadows technical brilliance of his performances and the scope of his musical offerings, but today we celebrate the man & his music.

Ram Samudrala is author of, among other important works, the "Free Music Philosophy" - which can be accessed via Ram's site (http://www.ram.org) or the EFF's site (http://www.eff.org). In essence, Ram's manifesto offers a unique and radical solution to the problems associated with copyright law and it's current abuse.

I had the opportunity to speak with Ram recently... 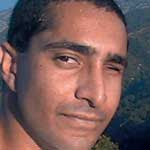 1) Ram, how & when did you first get interested in copyright issues (specifically) and IP issues (in general)?

It probably began in 1990 or so, when I got into Unix, GNU Software, and the growing Linux movement. It came to a head after some exchanges on alt.music.alternative in 1994/1995 about the nature of music (which involved Bill Barbot of the band Jawbox who had just been signed to Atlantic, and later dropped). At this point, I decided to write the Free Music Philosophy.

2) Can you sum up the "Free Music Philosophy" and tell us if it has evolved since your original essay was written?

If you play guitar, you've probably heard of Troy Stetina - author of over 30 instructional books for Hal Leonard, owner of Artist Underground recording studio, contributing writer for Guitar One Magazine, former director of rock guitar at the Wisconsin Conservatory...

What you may not know, however, is that Troy has released three CDs of incredible music - music that you need to hear now.

Troy first picked up a guitar at the ripe old age of 12, learning songs by Kiss and Zeppelin. As he developed and learned increasingly difficult pieces (Van Halen, Ozzy's Randy Rhoads, and the like) he became interested in classical guitar and then in performing. He started his first band at 18 and was soon gigging constantly, and began teaching guitar.

Training location: Home Gym, my basement is converted into a gym. 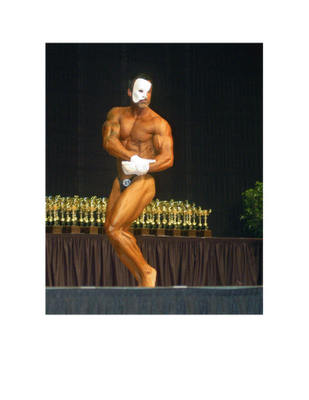 My workouts at home are much more focused and productive than going to a commercial gym where most of the people there are having social hour. You don’t need a fancy gym or tons of equipment to exercise.

Training philosophy: Listen to your body - it’s better to under-train than to over-train. If I’m tired, I won’t workout that day. If I feel strong then I’ll push myself harder. I train usually 5 days a week for about 45-60 minutes which breaks down to 1 body part a week. My main focus is the eccentric, or stretch, part of the exercise. This is the part of the movement that tears down muscle fiber and with proper diet and rest, tissue will repair itself stronger and larger.

I do not do cardio or abdominal training period. My workouts consist of high reps using light to moderate weight with 30 second rest periods between sets. This type of training is my cardiovascular training.