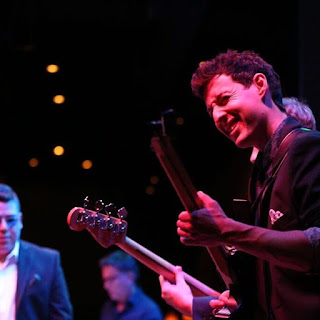 Mr. Rafowitz attended Berklee College of Music (graduating in 2015) and first got national attention when he won the the first Strandberg Guitarworks competition with his song "Perpetual Motion" (a song then recorded by his band Sound Struggle).
He then co-founded his current band Arch Echo, who will be releasing their debut album later this month. 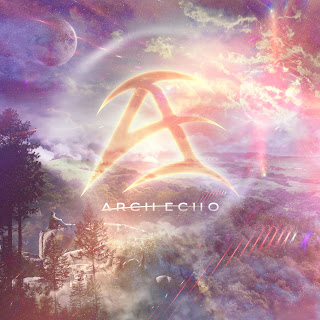 I’m currently involved in Arch Echo, and technically still a member of Sound Struggle. Sound Struggle has taken a bit of a hiatus while leader Cameron Rasmussen has been on tour with a Broadway show, but another album is in the works. I am most involved in Arch Echo, and have been since its founding in mid 2016. Arch Echo’s debut full-length album will be released on May 18th, 2017!

Sound Struggle was actually the first metal band I was ever involved in. In fact, I had never really listened to metal before I joined! I was more of a funk-fusion player at the time, but, being new to Berklee, I was looking to branch out. Cameron came to me and mentioned he wanted to form a funk-metal band, and I was very titillated by the idea, and joined without hesitation! He was the principal writer in the band, although I did offer ideas and progressions for album one, and two compositions for album two.

Arch Echo is where I’m really finding my voice. I feel like Arch Echo is my first real “passion project”, and I think the same can be said for most of the band. We’ve been working non stop since April 2016, and I’ve enjoyed every moment of it. Since moving to New York City this past November, I have spent more time writing and recording Joey’s family’s home in Lake Placid than I have at my apartment, and by a large margin! I’ve even been to Nashville twice in the past couple of months (where Adam Bentley, Joe Calderone (bass), and Richie Martinez (drums) live) tracking, mixing, and shooting videos. I have given this past year or so of my time and energy to this music, and the result is worth all of the blood, sweat, and tears. I look forward to touring with this group of guys, they’re all incredibly talented musicians and kind people.

I’ve given Arch Echo more of my emotional energy than any other band or project that I’ve been involved in. Joey Izzo (keyboardist, producer) and I composed the entire album over several months (with help from Adam Bentley on “Afterburger”), during which, as stated above, I lived at Joey’s upstate. I can’t say I’ve ever made a band or project 100% my life in that fashion before. I am also more proud of my playing on our upcoming album than I have ever been. We wrote parts that would challenge us and force us to improve, but above all, melody and emotion was paramount. I believe that we achieved that goal, and I know that I have already improved as a player and musician as a result of the process. The bass and drum parts were first composed using midi, but Joe Calderone (bass) and Richie Martinez (drums) have incredible musicality and skill on their instruments, and took the parts to places that I couldn’t have imagined. I very much look forward to all of us composing our next album together, from the ground up. Working with Adam Bentley to compose “Afterburger” turned it into a totally different beast, and Richie and Joe have a lot to offer as well. I believe this album has become the best that it could be, and that’s only because of the team we have. 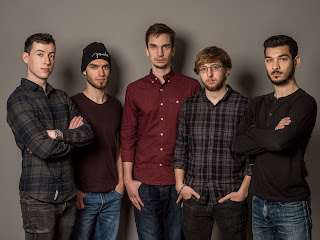 As far as my favorite gear goes, it has to be a tie between my Axe Fx IIXL and a Strandberg Boden OS7, which I use both live and in the studio. To me, this is the end-all combination, and is compact enough to carry on a plane. My Axe Fx lets me dial in the exact tones I’m looking for and record them directly into my DAW, or go directly into the soundboard at a gig. I’ve even gone so far as to program my patch changes beforehand, so that it switches automatically. My Strandberg lets me play for hours on end with ease, and sounds incredible. I’ve used it for pop gigs, jazz gigs, and of course metal gigs, and it never fails to shine (and get frequent “What happened to your headstock?” jokes). I recently put some Bareknuckle Aftermaths in the OS, and they really took it up another notch. I have a custom Strandberg build in the works, so keep your eyes and ears peeled!

I also recently purchased a Precision Drive by Horizon Devices, and I am LOVING how it sounds so far. It’s a very versatile, transparent drive that pairs well with my Axe FX. I’ll certainly be using it for recording and gigging in the future!

As my tastes evolved from classic rock, to jam bands, to fusion and progressive metal, my influences have changed. Towards the beginning of my playing Jimi Hendrix had a big influence on me, as did jam bands such as Umphreys McGee and, oddly enough, Trey Anastasio of Phish. Improvisation has always fascinated me, and that’s what jam bands are all about! As my musical tastes matured, I discovered Jazz Fusion. The first fusion bands I got into were Bela Fleck and the Flecktones, and Return to Forever. Al Di Meola’s playing was the perfect bridge for me from rock into jazz. From there, I discovered players such as John Scofield, George Benson, Frank Gambale, Guthrie Govan, Greg Howe, and the incredible Allan Holdsworth, who continues to be my greatest influence, may he rest in peace. Players like them helped shape my musicianship, and showed me how diverse jazz can be. I’ve since become interested in players like Tosin Abasi and Per Nilsen, and progressive music in general. I think the reason why I got into progressive metal is that it’s essentially through-composed, heavy jazz-fusion. There really are no compositional limits. I also love the technical challenges prog poses, it gives me food for practice!

My favorite newer/younger guitarists are definitely Jakub Zyteki, David Maxim Micic, Plini, and Aaron Marshall. They’ve really shown me the diversity and beauty of progressive music, and are some of the most creative minds there are. Not to mention, they’re damn incredible players! I have loads of respect for their composition, production, playing, and success as independent artist. 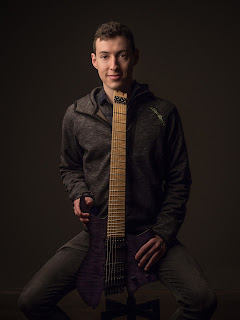 There are plenty of things I wish I could tell young Adam, but I’ll pass them on to you instead!

1: Practice slowly! If you can’t do something slow, you don’t have the right to do it fast. Be mindful of the many nuances in your technique, and see #2...

2: Use a metronome! Time is everything, and I’m convinced wrong notes in time sound better than right ones out of time/with bad time.

3: Give every note a purpose! Playing flashy licks is fun and no guitarist is innocent, but make sure the content is compelling. A simple melody can have as much impact in many cases.

4: Be consistent! All of these tips are meaningless if not used often Practice every day, without fail, and with intention.

5: Play with other people, especially if they’re better than you! You may end up out of your comfort zone, but, good! You’ll grow as a musician and a human being for it.

6: Take care of your body! Stretch before and after playing, and take breaks. If you’re playing with tension, see #1. Don’t play through pain. Listen to your body, or you’ll regret it!

7: Don’t get discouraged! There will always be someone better than you, no matter how great you are. Don’t fixate on virtuosos, just become the best that YOU can be.

8: Listen to a variety of styles! This listening will make it into your playing, and give you ideas you never would’ve thought of otherwise.

I could go on all day, but I’ll spare you. Consider this your “8 Tips” clickbait for today!

My plans right now are to hit the road with Arch Echo as soon as we can. My goal has always been to tour in a band of my own, and that dream is very close to being achieved. I will never stop trying to learn and grow as a guitarist and musician, and as long as I’m doing that, I know I’ll be happy!

Thanks for having me David, it’s been a pleasure!