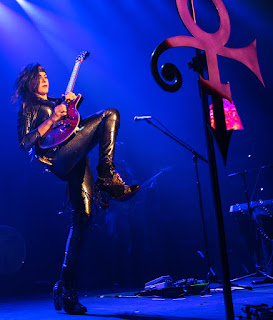 GUITAR PLAYER MAGAZINE said "...Trading blazing solos with the late Purple One on a nightly basis, she proved her mettle, and earned a place in guitar history."

And its just that simple.

Donna Grantis is best known as the last guitarist for New Power Generation and as the guitarist of Prince's 3rdEyeGirl (who released the top 10 & critically acclaimed album "Plectrumelectrum" in 2014, with the title track written by Donna), but has been slugging it out on the scene for years.

The McGill jazz performance graduate quickly went to work as a session player and band leader in the Toronto area, working with a stunning array of musicians of all styles from 2002 to 2012. Also during that time, she worked as music director for the CBC and others for all manner of events.

Then, in 2012, she hooked up (by invitation) with Prince, and, following the release of their album, toured Europe and North America, including 3 nights headlining the Montreux Jazz Festival...and playing at the White House for the Obamas.

But she doesn't rest on her laurels. Donna hasn't slowed a bit and has a new album and band about to launch their tour in August (first show is 8-4-17 at the Dakota Jazz Club).

Learn more about Donna at her web-site!

I had a chance to chat with Donna recently - check it out! 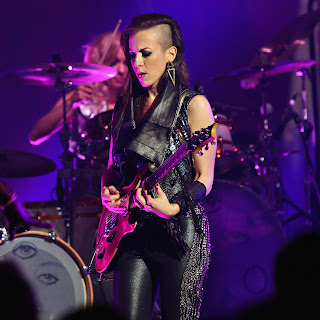 I will be debuting my newest musical project later this year - both live and on record!  Stay tuned…

Prior to working with Prince, I fronted an instrumental jazz-fusion trio called the Donna Grantis Electric Band.  Continuing in that spirit, but now with a plethora of knowledge and experience gained from working with the greatest musical mentor of our time, I am excited to debut my newest musical project as a bandleader.  The group - a quintet - featuring some of the best musicians in Minneapolis, includes a brilliant tabla player from Brooklyn, NY named Suphala.  This is the ﬁst time I am composing, recording and performing with tabla.

3RDEYEGIRL.  It was the experience of a lifetime to play lead guitar alongside Prince in his most rock heavy band.

I play a variety of PRS guitars, including a custom shop guitar modeled after a Mira semi-hollowbody, a CE22 named Elektra, a gold sparkle Starla and a 513.  I love PRS 100-watt Archon heads and I often run 2 of them in stereo through Trayner YBX212 vertical cabs.  I had a custom pedalboard built speciﬁcally for my role in 3RDEYEGIRL that features 21 pedals.  Some of my favorites include a crybaby 95Q wah with autoreturn switching, a FoxRox Octron2, an MXR micro amp boost pedal and a BOSS BF-3 ﬂange.  I always use D’Addario 10-42 gauge strings because I dig the way they sound and feel.

5) Who would you cite as early inﬂuences, and who are your favorite new players? 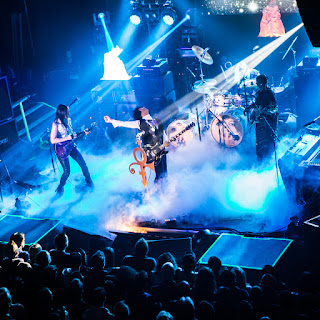 Follow your passion.  Learn, study, play and create music that moves you.  Surround yourself with other musicians who will challenge and elevate your abilities.

7) You were awarded a scholarship to McGill, where you ultimately graduated with a degree in Jazz Performance. Do you recommend the university track for players wanting to work professionally, and do you think it prepared you best for stage or studio?

The experience I had studying jazz at university was greatly beneﬁcial in helping to prepare me for a career as a professional musician.  Improvisation, composition, arranging, ear training, theory and ensemble courses were very valuable in developing skills that I continue to cultivate today.  Spending years in an immersive musical environment with like-minded aspiring musicians was a deﬁnite advantage to being enrolled in a formal music program.  That being said, I think serious independent study can also be an effective way to prepare for a career on stage and in the studio.

8) Many people know you for your work with Prince, which we'll get to in a moment. But you've also played with some other heavy-weights from the worlds of jazz (Kellylee Evans), pop (Amanda Marshall) hip-hop (Kardinal Ofﬁshall), blues (Shakura S'Aida), and many others, as well as a musical director for CBC and others, and running your own band. How do you keep your chops up for such a diverse array of projects?

The regular act of transcribing, practicing and performing continues to keep my chops up.  During my time in Toronto as a session musician, it was commonplace to support a hip-hop, jazz, blues, singer-songwriter, soul or rock artist on any given week.

9) You worked with Prince for several years, touring & in the studio, with both 3RDEYEGIRL and New Power Generation. Can you talk a little about how you got the gig, and what were the biggest demands on you as a musician and guitarist? 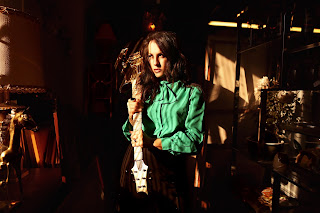 Prince asked drummer Hannah Welton and producer Joshua Welton to ﬁnd a female guitarist.  They discovered a couple of live performance videos I had posted on YouTube, and forwarded them to Prince for review.  I was then invited to Paisley Park to jam.  From that point on, Hannah, Ida and I launched into an intense rehearsal schedule.  Recording sessions and live performances soon followed.  The biggest musical demands were learning material very quickly, retaining a repertoire of hundreds of songs and being ready for anything on-stage (a changing setlist and solos at anytime on cue).

To continue creating, recording and touring with both my own project and artists who inspire me.