Jealous of her sister's guitar, Jennifer asked for a guitar for her birthday. When her dad brought home "...the coolest looking guitar on the block..." - she had an red & blue electric while all the other kids had acoustics - she was hooked. 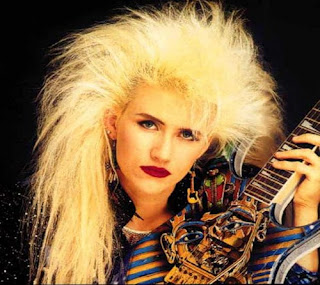 From lessons with a San Diego jazz guitarist to studying music at Pasadena City College to a stint at the Musicians Institute (where she graduated and then taught guitar), Jennifer has grown into one of the true giants of modern guitar music.

She struggled from the early 80s, gigging in small clubs, but when she won the covetted spot as Michael Jackson's guitarist in 1987, she went from playing before 100 people in a local bar to playing in front of 50,000 screaming fans in Tokyo (her very first gig with Jackson). Since then, she has taught privately, written 2 books on guitar technique, recorded 2 solo albums (1992's "Above, Below, and Beyond" and 1997's "Momentum"), recorded with greats like Natalie Cole, Carmine Appice, and Michael Sambello, and toured the world with Jackson as well as guitar legend Jeff Beck.

Check out her web-site, www.batten.com and, if you've never heard her play, be sure to check out the music clips.

I had the good fortune to speak with Jennifer last spring, and she answered a few question for TinFoil readers. Check it out!

I'M TRYING TO FINISH MY NEW CD THIS SPRING. 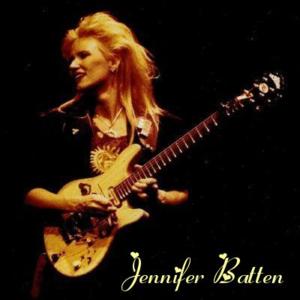 2) How does this differ from your past work?

I'M PROGRAMMING EVERYTHING MYSELF SO IT'S VERY TIME CONSUMING. I'VE USED A LITTLE SPOKEN WORD IN IT AND A LOT MORE EXOTIC SOUNDS THAN IN THE PAST.

IT CHANGES ALL THE TIME. I THINK WHEN I GO OUT AGAIN I'LL USE MY PEAVEY 5150 HEAD AND CABS AND A DIGITECH STUDIO EFFECTS PROCESSOR. I WANT TO KEEP IT SIMPLE. IF I GO OUT WITH JEFF BECK AGAIN I'LL ALSO HAVE ROLAND GUITAR SYNTH GEAR.

JEFF BECK IS ALWAYS MY FAVORITE. I ALSO LIKE VAN HALEN AND GEORGE LYNCH A LOT.

TRY TO LEARN OFF YOUR FAVORITE RECORDS AND EMULATE THE SOLOS. 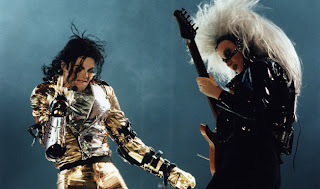 ONCE MY NEXT CD IS DONE I WANT TO HEAD INTO A COMMERCIAL FULL BAND PROJECT.

8) Thanx for talking to us, Jennifer!


In the time since Jennifer gave this interview, Jeff Beck's album "You Had it Coming" - which Jennifer helped compose and record with Jeff, bassist Randy Hope-Taylor and drummer Steve Alexander - was hailed by fans and critics alike as his best in years (hell of a follow-up to a Grammy nominated "Who Else"!). The song "Dirty Mind" was then nominated for, and won, a Grammy Award for Best Rock Instrumental Performance.

One-shot support: https://www.paypal.me/skinnydevilmusic​ or www.venmo.com/David-McLean-47 (Pay What You Will)
Posted by Skinny Devil at 04:21