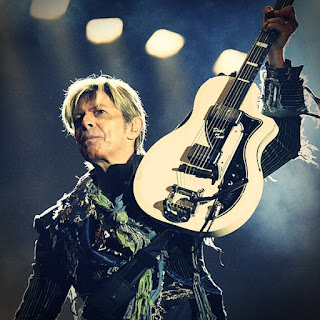 I've been either teaching or performing various Bowie songs as of late, and since I teach primarily guitar, discussion of Bowie's guitarists has come up a lot. It occurred to me that I should jot all this info down for anyone & everyone who may find it of interest.

David Bowie had an incredible career full of splendid musical challenges (and much more, but remember our focus is on guitar), and he had an entire stable of incredible musicians with whom he forged this path; his '70s work saw players from Mick Ronson in the early days to tag team Carlos Alomar & Earl Slick to Robert Fripp to Adrien Belew as well as guests like John Lennon, followed by his '80s output with the likes of Nile Rogers & Stevie Ray Vaughan to Peter Frampton (with Carlos a constant traveling companion) as well as guests like Charlie Sexton, to his 90s catalogue featuring the introduction of Reeves Gabrels (with a brief return of Rogers & Ronson & Alomar) and guests like Lenny Kravitz. The 2000s saw a collaboration with David Torn and Gerry Leonard, and guests ranging from Pete Townsend and David Grohl and more as well as a return of Earl Slick and, for his final album, Ben Monder.

But even so, the above list is far too dense for this medium. As such, I'm going to trim it down to only a half dozen so we can focus with greater depth the players on the brief roster. Apologies in advance, as I'll be leaving out some amazing guitarists....including Fripp (who created the long sustaining guitar soundscape of "Heroes"), SRV (who played on much of the "Let's Dance" album), and Bowie himself, who handled much of his own guitar duties throughout his entire career (including the lone 12-string of "Space Oddity", the amazing chord riffing of "Ziggy Stardust", and the iconic electric signature riff of Rebel Rebel").