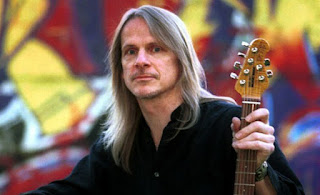 Where does one begin in an attempt to encapsulate a career like that of Mr. Morse into a few short introductory paragraphs? Hmmm....

7 Grammy nominations, millions of albums sold, played for several legendary bands (including Dixie Dregs, Kansas, and Rock-n-Roll Hall of Famers Deep Purple), voted "Best Overall Guitarist" by Guitar Player magazine for five years in a row (and one of a VERY short list of players of the GP "Gallery of Greats"), 7 Grammy nominations, played on almost 200 albums (30 as band-leader), has a signature model guitar from MusicMan Guitar Company & signature pickups from DiMarzio, has toured the world numerous times, played thousands of shows, and is cited by players such as John Petrucci & the late Shawn Lane as one of the best players alive.

And that just scratches the surface of his accomplishments.

He is known for his uncanny ability to flow effortlessly from rock to classical to country to jazz to progressive to bluegrass and more, is the longest serving guitarist in Deep Purple (the other guitarists all legends: Tommy Bolin, Ritchie Blackmore, and Joe Satriani), he has seen his work top the charts for albums & singles in a variety of countries (Deep Purple's 2013 release "Now What?" was a Top 10 album in 10 countries, four of those at number one, while Flying Colors' 2011 debut reached #9 on Billboard's Hard Rock Charts), and is about to embark on the next Deep Purple tour which will carry them across Europe & North America for the next 7 months.

And that still leaves a lot out.

Like the nearly 30 performance DVDs, 3 instructional DVDs, dozens of magazine covers, TV & radio appearances, 9 music/tab books of his music, 2 books (compilations of 50-odd magazine columns he wrote in the 1980s), product development & endorsement deals, clinics, and so much more.

Clearly, Steve is one of the hardest working guitar players on the planet, and he isn't slowing down a bit, even after over 40 years of this!

Learn more about Steve at his web-site and that of Deep Purple.

I had a chance to speak with Steve recently - check it out! 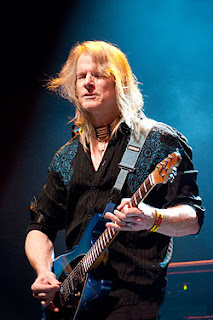 
Flying Colors, writing with my son, Kevin Morse for a special project with Mike Portnoy and he. The new Purple album is coming out in a few days, and a very long tour with them.

The only thing different is the project with my son. We are both writing for it, so it has some more metal/neo classical, as well as pop influence. The Flying Colors and Purple is new material, but same guys, including same producer of Purple: Bob Ezrin.

I'm lucky enough to be proud of all the groups I've worked with. However, my most singular, solo album, High Tension Wires,stands out because I did work out so much of it in solitude, while going through a huge upheaval in my life and career. I'm proud of that because it taught me a way to write in any style that I liked. I continue to do that for some TV musical cues, but now feel totally comfortable writing with other musicians.

My most favorite gear is my guitar. I use the guitar to change tone, level of distortion, add dynamics, etc. I plug into a Kealey compressor, TC polytuner, then into my ENGL signature head. Right into one or several ENGL cabs. However, from the preamp output, I drive 2 TC flashback delays with my toneprint settings installed. They are set to full wet, or 100% delay, and the output goes to 2 Ernie Ball volume pedals.

The volume pedals are normally off, so you only hear the normal, dry amp playing. However, when I press down either volume pedal, the signal now flows to the 2nd amp (ENGL) that is used as a 'wet' or 'slave' amp. The pedals are summed together with a passive mixer into the 'effect return' so that the preamp of the wet amp is bypassed.

One pedal is long delay, one is very short (like a chorus, with modulated time delay). So, you always hear the dry amp, and can blend in as much delay as needed from the wet amp also. With Purple, I also use a 3rd harmonic shifter pedal into a 3rd volume pedal. This gives an octave down for a few parts in the set, and also a minor 3rd up for one of Blackmore's classic solo sections in "Hard Lovin Man".

With Steve Morse Band, I also use a TC hall of fame reverb in the FX loop of the dry amp. In addition, I use a guitar synth for adding some extra variety, I'm using several and haven't decided on which will be working the most reliably for the next gig.

Sometimes, I also use the TC flashback delay pedal in the normal configuration with my toneprint in order to add a little bit of air to the sound when I'm only using a single amp......or when I think there is a problem getting the 'wet' amp up loud enough, usually because nobody in any group wants to hear it in the monitors, because it is time-delayed.

Early influences are the familiar: Clapton, Beck, Page, Hendrix, Harrison, McCarty, McLaughlin, Howe, and many more. My head is spinning with the amount of amazing guitarists that are new. I literally get a link every few days from my friends with yet another young player doing something incredible. For me, my favorite players are the ones that bring the best out of other musicians, and I can't see that from an endless supply of amazing YouTube moments. So, I don't know right now! 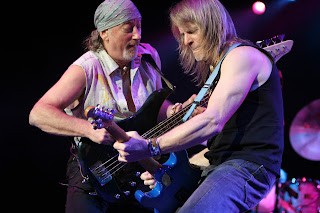 The boring things your parents told you are the most important. Respect for your other band members to show up on time, be prepared, and turn down when they are featured, for instance.

If you can't have the discipline to finish a boring chore, then who will be the one to tell you "let's make that more precise, or let's learn this position shift better" when you're practicing by yourself? You have to start raising the bar with everything, if you're going to raise the bar with your playing, since your development should go on over your lifetime.

Play what you love while you are young enough to have a choice......it should be fun! However, I would spend some time every single day adding to your toolbox things like theory and technique. But spend part of every day playing something fun.

7) You've gone from forming bands (Dixie Dregs) to solo artist (Steve Morse Band) to joining established acts (Kansas, Deep Purple) to collaborations (Angelfire) and so much more. Do you have a particular preference for your role in an ensemble (band-leader, sideman, etc)?

Good question, since I like both for different reasons. With my own band, it's nice to have a musical hunch and know that it will get a chance to be tried and tweaked. But with a group, you end up writing in a slightly different direction because of the contributors, and you get something you would not have done by yourself.


8) You stay very fit and have been vegetarian for decades. Can you speak a bit about that and how you feel it may effect you as a musician & guitarist?

The only time I've been a vegetarian is during the time I'm at the salad bar. I do order vegetarian meals in some Countries, and enjoy them, but I can't resist the meat dishes I've grown up on. I do try to exercise a bit every day, and believe that a healthy body and mind go together, and all of that. We, and I include myself, need to be reminded to live our lives as if we're going to last a while! I still have food addictions that are unhealthy, and all I can seem to do is limit them somewhat. When I'm home, I really enjoy working outside all day, with the luxury of protection from the sun. I also like mountain biking for exercise, as it doesn't feel like exercise while you're looking ahead for the smoothest line. It all helps my playing when I feel fit. I've also got some increasing infirmities that I have to work around, but we all get those and can only make the best of what we get to work with! 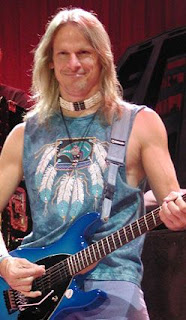 9) You are known for not only your incredible guitar technique, but also for your soulful approach, and high intensity performances. How do you balance all of those factors in practice and performance?

Practice every day. I still do. I feel music intensely, but also enjoy it intensely. So, I'm actually often smiling as I am playing. I think we all need a balance between technical and 'feel' practice. That is, some random, fun improve included with the technique woodshedding.


10) You've written articles for magazines, toured the world with multiple acts, top 40 singles (both rock and jazz) and #1 albums, recorded nearly 40 albums as band member and that again as guest artist and that yet again with compilations & live albums (in all over 200 albums), 7 Grammy nominations, signature guitar model, signature pick-ups, various endorsements, multiple "best guitarist" awards & Guitar Players Hall of Fame (with only 2 other players), sold millions of albums worldwide, and so much more. What do you see as the Steve Morse legacy?

Errat: 6 Grammy nominations. Probably haven't sold millions worldwide, at least not paid for! I'm not sure about 200 albums either, but could be for sure including non licensed albums.

I would like my legacy music work to be the compositions that I've written or co-written. I'm always glad if my music makes people smile, or have any positive outcomes in this troubled World. I think every person that has a platform or microphone has a responsibility to realize that they are helping shape the culture we live in. So, take it as seriously as you're capable of. If you play or talk to an audience, you have a responsibility, and you should be at your best. I am hoping to help spread that philosophy amongst musicians, as I have in my guitar clinics around the World. That could be the most important thing I ever do: help make people become aware of their own role in making things better.

Surviving this long tour coming up, Flying Colors, my project with my son, a brief  Dregs reunion somewhere, sometime, and more chances to help future musicians.

One-shot support: https://www.paypal.me/skinnydevilmusic​ or www.venmo.com/David-McLean-47 (Pay What You Will)
Posted by Skinny Devil at 09:27