Steve Stevens, Joel Wanasek, Francesco Fareri, Stevie Salas, Jennifer Batten... Established gurus and heroes waiting in the wings, the "Guitar Gods" series talks to some of the finest players on the scene!

About 10 years ago, I was working for a small publication along with life-long friend Greg Francis. It was an interesting format, mixing politics & social commentary, entertainment, and education. Ruth Bryant, my publisher, thought it would be a cool idea to have a series of interviews on several topics by experts in said topics. She called me into her office and said, "Wouldn't it be interesting to have a series on guitarists written BY a guitarist? Why don't you get out there and interview some great players!". 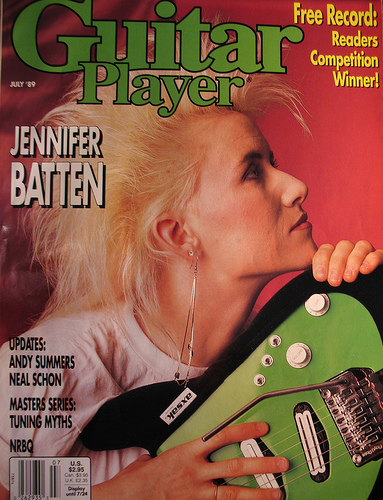 I was fortunate enough to make my first interview with Windham Hill recording artists and Grammy Award nominee Michael Hedges (who, sadly, died several years later in an automobile accident). Unfortunately, the magazine went belly-up just weeks later, and the series never got off the ground......until now. TinFoil Music Magazine has made it possible to breath life back into Ruth's idea (thanx Joe!). The interviews will be short and sweet, and aimed directly at our musician & guitarist readers. But everyone else should find them enjoyable, too!

Many of the interviewees have also graciously donated CDs and promotional stuff for a series of giveaways, so keep your eyes peeled for those!

We'll start off the series with a (highly edited) reprint of the interview with Michael, then continue in the weeks and months to come with interviews from other Guitar Gods - both established and new. You'll hear the words of Grammy Award winning solo artist & Billy Idol guitarist Steve Stevens; Up-n-coming guitar hero & Insane Guitar publisher Joel Wanasek; touring guitarist for both Michael Jackson & Jeff Beck and former GIT instructor Jennifer Batten; and many more exciting players!!