Book Review: "Language of the Blues"


They set out with their hoes over their shoulders and their few possessions in a sack to hop the train, which would take them to the next town to find work in the fields. The year was 1850...or 1890...or 1910. By 1934, the BTA estimated there were some 1.5 million transient workers - or hoe-boys, shortened to "hobos" - riding the rails in the U.S. The term "hobo" showed up in songs by Howlin' Wolf, Memphis Minnie, and John Lee Hooker. We learn this, and other fascinating tales, from musician & journalist Debra Devi in her new book, "The Language of the Blues". 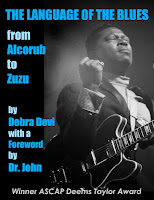 The book is chock full of wonderfully colorful interviews with blues legends like Little Milton, Bonnie Raitt, Hubert Sumlin, Robert Jr. Lockwood, Robben Ford, Bob Margolin, Jimmie Vaughan, and so many others, who explain not only the meaning of terms like "hobo", not to mention "voodoo", "crossroads", "balling the jack", "cool", "honey dripper", "killing floor", "juke", and over 100 more both common & obscure, but their origins, evolution, and current usage. Debra then adds historical data and lists of songs that use the language.

The result is an incredible book much more than a mere historical reference for researchers. "The Language of the Blues" is a rich, dynamic, living thing that opens a door to a deep music created by sometimes fringe but often brilliant musicians. In the words of 2005 Handy Award winner Bob Margolin, "......you can open it up at random and fall into a world of your favorite blues songs, and find out more about the lyrics than you would by guessing from context...".

The book is framed in a rough dictionary format, so you can read it cover to cover or simply open it randomly to a page and you're met with wonderful yarns and meticulous research, and the list of suggested listening covers songs by Willie Dixon, Muddy Waters, Charlie Patten, Bo Carter, B.B. King, Lightnin' Hopkins, Trixie Smith, Albert Collins, Son House, Albert King, Robert Johnson, Bessie Smith, Ma Rainey, Skip James...more legends than you can shake a stick at. It also includes never before published photos and a fabulous forward by Dr. John.

As 9 time Grammy winner Bonnie Raitt says, "What a great resource...as fascinating as it is informative. Debra's passion for the blues shines through."

You can buy the book on-line or in your favorite book store, and you can visit Debra on-line HERE

(Editor's note: Sine the 2006 publication, the book has been revised and then re-issued privately as an e-book and we'll be doing an up-dated review soon.)