The Titan Prometheus, banned from Olympus after the "Trick at Mekone", scaled the mount and stole fire. He took the fire and gave it to the human race, sparking a revolution - bringing mankind from "barbarian" to "civilization" (i.e. - science, technology, & arts). 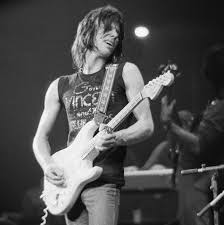 For this crime, Zeus punished him severely....but time has a way of working things out, and now Prometheus is remembered as well as any of the Greek Gods.....
Jeff Beck was born in London in 1944. He sang in the church choir and had other such exposures to music, but when he heard Les Paul playing "How High the Moon", everything changed for him. He began playing in pub bands while in school, and by 1962 had recorded a single with the band Screamin' Lord Hutch & the Savages. From there he played with several other acts, logging hundreds of hours of stage time, and by 1965 had been tapped by The Yardbirds to replace departing guitarist Eric Clapton. The short span Jeff spent with the Yardbirds (under 2 years) yielded roughly half of their hit songs.
By the end of 1966, Beck had also recorded his first solo single, "Beck's Bolero", which featured Jimmy Page (later of Led Zeppelin, acoustic guitar), Nicky Hopkins (later of the Rolling Stones, piano), Keith Moon (of The Who, drums), and John Paul Jones (also Led Zeppelin, bass). The song became a calling card of sorts, showcasing how different his musical sensibilities were from the norm.
Then The Jeff Beck Group was formed...featuring Nicky Hopkins (keys), Ronnie Wood (bass), Ansley Dunbar (drums), and Rod Stewart (vocals).
This is about the time I stop with the standard biography. One can easily see how many careers were launched by Jeff Beck, and we aren't even out of the 1960s yet. Ronnie Wood went on the play guitar for the Rolling Stones, Ansley Dunbar played for everyone from Journey to Frank Zappa, and Rod Stewart, of course, became a legendary vocalist & one of the best-selling artists of all time. Everyone mentioned above went on to massive mainstream success and (save Hopkins) has been inducted into the Rock-n-Roll Hall of Fame.
His jams with then-new artists like Jimi Hendrix is the stuff of legend. His work with Stevie Wonder awe-inspiring. His Jeff Beck Group, according to his friend and collaborator Jimmy Page, was the model upon which Led Zeppelin was born.
But the list of musicians with whom Beck collaborated doesn't stop there. From producers like George Martin (Beatles) and Nile Rodgers (Chic, Madonna, David Bowie); guitarists like Joe Perry (Aerosmith), Stevie Ray Vaughan, & Jennifer Batten (Michael Jackson), vocalists from Imogen Heap to Imelda May to Joss Stone; and a long list of drummers, keyboardists, and bassists including legendary names like Tal Wilkenfield, Terry Bozzio, Max Middleton, Narada Michael Walden, Tim Bogert, Vinnie Colaiuta, Jan Hammer, Carmine Appice, Doug Wimbish, Cozy Powell, Tony Hyman, Simon Phillips, Rhonda Smith....and so many more. Look up any of those names and your appreciation of his impact (and the level of respect he commanded within the music community) will skyrocket.
Beck, as I mentioned in my more personal reaction HERE, "...Jeff never stopped. Like the Miles Davis of rock music, he kept changing, evolving, rebelling against his own musical past. Never satisfied with what he had already done, and instead carving a new name into new stone....". Joe Perry said "...Jeff Beck was the Salvador Dali of guitar, to see him play was to hear the ultimate 6 string alchemist create magic in a world of its own...." and it was most certainly true.
Jeff, somehow, scaled Olympus and stole fire. Then he shared the fire with the world through his music - his writing and his playing.
Like Prometheus, doing so sparked a revolution, altering the minds & imaginations of anyone who heard his song. Those minds included the other guitar gods of his generation, as well as the generations that followed, being cited as a major influence by none other than Brian May (Queen), Eddie Van Halen, Steve Stevens (Billy Idol), Steve Vai, and more, and was often referred to as "a guitarist's guitarist".
But like the Titan Prometheus, there was a price to pay for stealing the Fire of the Gods. 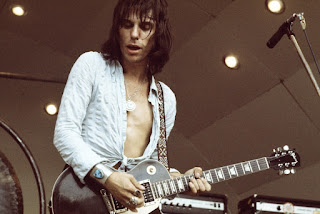 Jeff's commercial success and fame, while substantial, never equaled that of the better known Guitar Gods from his era & never broke him into the mainstream music world. Even after decades of recording and touring, his popularity was always eclipsed by others, despite the fact that those others had long since retired or ceased writing & recording new music. By contrast, Beck's final album was a collaboration with none other than actor/musician Johnny Depp (2022). All proper respect to the Pantheon of 60s/70s rock guitar stardom, Beck simply never stopped....constantly writing, re-inventing, exploring, collaborating. He was seemingly a tireless champion plunging into a fathomless well of creativity. His odd progressions, shifting keys, mixed time signatures, angular melodies, and futuristic excursions of guitar sound & improvisation inspired everyone who ever heard him.
But also like Prometheus, the price was paid in full and so Beck's perseverance broke the chains. In his 60 year career, he garnered 16 Grammy nominations with 8 wins (spanning from 1976 to 2011), is remembered as utilizing both distortion & feedback prior to the release of Hendrix's first album, was voted #5 on Rolling Stones' "100 Best Guitarists of All Time", was TWICE inducted into the Rock-n-Roll Hall of Fame, and more.
For those who loved his music, they'll note the clear "sin of omission" in the above ramblings (in that I've left out HUGE amounts of information) and will not need a suggested listening list. But this tribute is also written for those unfamiliar with his work, and so I hope I've provided a proper introduction to this larger than life figure so many have missed. Please take a moment to explore his magic. I humbly submit the following list to get you started:
Beck's Bolero (1966)
Shapes of Things (Yardbirds - 1966)
Led Boots (1976)
Slingshot (live on Arsenio Hall - 1989)
What Mama Said (live on Letterman - 1999)
The Revolution Will Be Televised (2018)
And finally, perhaps appropriately, The Final Peace (1980)
Thank you, Jeff Beck.....for all the strange and beautiful noise.
Posted by Skinny Devil at 08:54