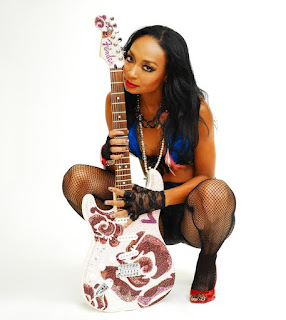 "I love where she's coming from." - Stevie Wonder

Guitar flipped upside down and played leftie, Malina is in the fast lane to the top of the pop-rock heap. A fabulous guitarist with the compositional chops, the voice, the dance moves, and the look to create the whole package in a way we haven't seen in a long, long time...and in a way we desperately need.

Or you may have seen her when she joined the "Experience Hendrix" tour, sharing the stage with the likes of Eric Gales, Jonny Lang, Eric Johnson, Brad Witford, and others, or sharing the stage at Bospop Festival with legends like Chaka Khan, or on other stages around the globe, where she has shared the stage with artists as diverse as pop icon Robin Thicke and guitar legend Vernon Reid, Eral Slick, and Lemmy (Motorhead).

But if you haven't, the time is now.

She is an artist of many talents - a real musician with real-world savvy thrown in - and her time has come.

Learn more about Malina at her website (and be sure to check out the video at the end of the interview!).

I had a chance to chat with Malina recently - check it out! 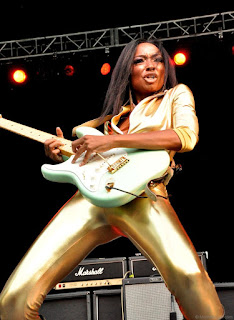 My new album. I’m so excited to share it! I just finished recording a song with a HUGE artist for there new record that I can't mention yet but put it this way. It could be a game changer on so many levels.

I hope every time I do an album I've grown from the last one.

My goal is to keep fine tuning my sound of Funk and Rock and being in truth. For me that goes for playing guitar, singing, writing, continuing to evolve my sound commercially, and being my authentic self.

I really love Rock and Roll Baby. We recorded a few of the tracks at Capitol Records and with songs like "Foxey Lady" and "A Little Rough" when we wanted more vintage tones. We went thru many Marshall Amps and ended up using the 10th Marshall JCM 800 amp they brought us. A lot of the leads I did were with my Fender Hot Rod. I just loved the guitars on that record. It had so many layers.

Pretty simple: Fender Hot Rod DeVille 212 amp, Boss Blues Driver pedal, Dunlop Wah, Boss Delay, and for more drive Boss Metal Zone. I also use the Boss ME- 50 as well. It just depends. My favorite go to guitar is my custom Fender from the custom shop. It's made to perfection right down to my virtual vintage blues pick up in the bridge position and my DiMarzio True Velvet in the neck position. I love and use Dean Markley Strings. 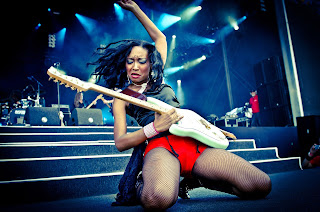 Get around players better than you, practice and look at guitarist as singers. Try to find your own unique voice sound, approach, strum, pick, feel then start fine tuning it everyday.


7) You've shared the stage with everyone from blues legends Hubert Sumlin and Honeyboy Edwards to pop icons Boyz II Men and Robert Thicke as well as played aside guitar legends Eric Johnson, Johnny Lang, and Eric Gales (to mention just a few). This appeal across stylistic lines is rare in today's world of music. Is this something you worked for or is it a by-product of your overall musicianship and style?

I consider myself a Rock artist with color tones of Funk, Blues and Soul. I love a good gumbo of authentic music. I try to come from a place of honesty as an artist and a guitarist. So yes, thank you for that, I guess it's a byproduct of my overall musicianship and style. I think that's why I've been able to connect with different genres of music. I'm very, very lucky that musically I've been accepted in different genres and get to play some of the biggest stages in the world, and we are finding an audience.

I'm always blown away by the people who influenced me, and then who are actually aware of my music! And it's even better when you get to honor them or play alongside them. When I played the Robert Johnson festival, I got a chance to go to the actual Crossroads where Robert Johnson made the deal with the devil, and the icing on the cake was getting to honor Honeyboy Edwards, who by the way, was the last person to see Robert Johnson alive. These guys were the ones who inspired the Stones, and many of the guitarist we know today. They are the real blueprint of Delta Blues. With the Experience Hendrix tours—well that's just the highest pinnacle of guitar excellence in my musical opinion. I learned so much every single time everyone of those players you mentioned got on stage.

Eric Gales is my big brother. Talk about having a confidence builder in your corner. I love him and what a lot of folks don't know is he came with my family and me to my national anthem performance. He said, “Malina I'm so proud of you girl. Hearing you hit them notes and playing in this magnitude, I can't help but shed a tear." Can you believe it? My guitar playing made Eric cry. Haha! Or so I like to think it did.

In the mainstream world of music it's always exciting when top Pop selling artist like Robin Thicke or Boys ll Men recognize your art. A great feeling of accomplishment was seeing my song K-yotic feat. Funk legend Bootsy Collins reach number 5 on Billboard 140 chart. The song was the most shared song in the country that week. But again to have my Funk Rock sound cross over to a chart that generally doesn't have guitars as a prominent role, then cut through…was priceless. 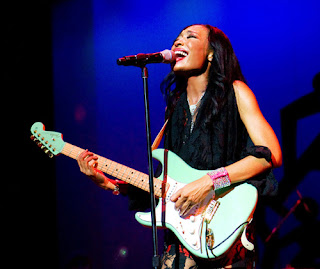 8) You've both sung and played the national anthem at large events. Is there a difference in how you approach the stage as a singer and as a guitarist?

Yes, as a singer, I'm warming up my voice and when it's playing guitar I'm warming up my hands. The key either way is to stay focused. If you deviate from the moment, your screwed. When I played it on guitar I think it was in front of 80,000 people and sold out. I think the Padres game was 40,000. But the Vikings vs Cowboys was a big moment in history and since then all my items that I wore that day are on display at the Hard Rock Las Vegas.

Apparently, I've been the subject of college courses, theses and books. I'm always blown away when universities ask if I can chime in and share my experience on that historical moment as the first African American female guitarist to play the national anthem on guitar at a major sporting event. Just think I was excited to play in my hometown I grew up in and didn't want to mess up. Haha!

I'm excited about releasing my new album. I love what we are getting and can't wait to see what everyone thinks about it. Oh I also had a chance to flex my acting chops this spring and shoot a movie. I'm so excited to see it on the big screen. I'm also co-founder of a new foundation called Drive Hope (DriveHope.org). Our mission is to open the minds of under served youth who don’t have access or resources to consider a career outside of their own difficult circumstances.

Thank you! I appreciate you thinking of me!