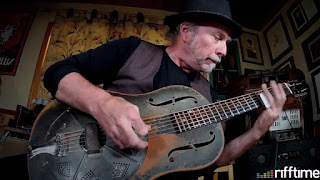 The blues is a stunningly diverse musical form that began some time post-Civil War in the southern US. The earliest blues was an acoustic form (electric blues came later) and often was performed by solo musicians. When performed this way, it requires great skill to "fill the space", and legends like Robert Johnson, Son House, Blind Willie Johnson, and others - with their distinct vocal styles, slide guitar skills, and rhythmic prowess - set the bar very high for those who dared follow.

Roy Rogers is one of the few living guitarists to dare and to meet that bar.

Born in 1950 in Redding, California, he was playing guitar by his teens. Soon after he was playing in bands and his skills helped him find early success as solo performer, band member, producer, and more.

He is a Grammy winning (John Lee Hooker's "The Healer") producer and also has multiple Grammy nominations. He also has several other award wins & nominations under his belt, including a Blues Music Award nomination for Best Blues Guitar Instrumental.

His work has been heard on movies like "One Flew Over the Cuckoo's Nest", he was a featured performer at Robert Johnson's 1986 induction into the Rock-n-Roll Hall of Fame (other performers included Chris Whitley, Warren Haynes, Rory Block, Keb Mo', Honeyboy Edwards, Johnson's stepson Robert Lockwood, Jr, and more), played as a member of John Lee Hooker's Coast to Coast Blues Band, been on national TV multiple times (including sitting in with Conan O'Brian's band), graced magazine covers, toured the world, and more....and racked up even more Grammy nominations along the way.

I had a chance to chat with Roy recently. Check it out!

My newest project is called "StringShot". I have already recorded some tracks with the great Brazilian guitarist Badi Assad (ed. note: read Badi Assad's "Guitar Gods" interview here at SD Magazine) and renowned stringed-harp/violinist Carlos Reyes. We will start to release some of the tracks very soon (we also have 2 videos done) - with a full CD to be released later this year or early in 2018. Touring of the band will not begin until next year.

"StringShot" is VERY different than anything that I have done before. I describe it as a 'new' blend of blues/Latin with some jazz elements....envision slide guitar with classical/bossa nova guitar and stringed harp/jazz violin--an interesting combination, to say the least! There are some vocals on the recording as well. 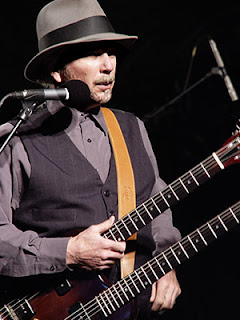 They are all different and reflect how you felt at a particular time in your life - so they are all important to me for different reasons. With that said, I would say that I 'stretched the music' the most on my recording "Slideways"- an instrumental CD (all slide guitar) recorded some years ago.

Gear: I usually use 3 guitars onstage - a Martin 0-16 NY with DeArmond 220 pickup ( which is really my signature sound); a 12-String Dobro electric; and a Custom Double-neck (both 6-string necks) made for me by Sean Chappell. Amplification is a 1979 Boogie Mk II and a MotionSound 'leslie'. I use only 2 pedals - an Arion SCH-Z Stereo chorus and a DurhamEletronics 'Sex Drive' gain boost, both of which are great.

In the studio I am able to use all kinds of setups (guitars and amps) to get the sounds for whatever the track needs - too numerous to all mention here.

Early musical influences for me, I've got to start with the Big 3: Chuck Berry, Little Richard, and Bo Diddley (I wore out all of their records as a kid!). 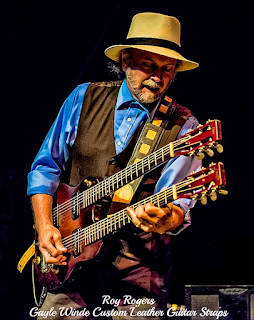 From there, more into blues: BB King, Muddy Waters, Elmore James, Howlin' Wolf, John Lee Hooker, and Jimmy Reed. From there, all the Delta blues musicians you can think of, but especially Robert Johnson, who will always be the king of the Delta Blues, hands down!


Finally, when the British bands came on the scene, for me it was the Rolling Stones and the Animals that were influential, in large part from the R&B and blues songs that they covered early on, which helped me find a lot of music that I did not know about then. It's all been part of a great journey really, and continues to be so, I am happy to say.

Listen to everything (all types of music, regardless of your preferences) - it will all go into the mix. But, remember it all starts with the blues. So go back to the sources, and then back to 'their' sources, wherever you find them! There is still so much music for all of us to discover, old or new!

I am considering a recording of standards and maybe a few jazz tunes with slide guitar. Or possibly recording/covering of some of my all-time favorite songs.

All the best. Thanks!