Another of our "lost interviews"....found! 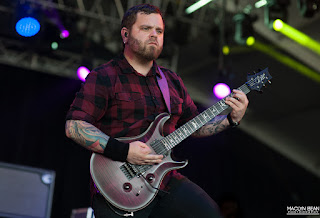 Dustie Waring plays guitar for the progressive metalcore band Between the Buried and Me. He is one half of the BTBAM guitar assault (along with fellow shredder Paul Waggoner), joining in 2005 after the exit of guitarist Nick Fletcher.

While Dustie certainly contributes classic "lead guitar" to the mix, he is best known for his massive rhythms, cinematic use of sound, and inventive counter lines, helping set Between the Buried and Me apart from the pack. (You can learn all about them while checking out their music at their web-site!)

They found time between the dates of their relentless touring (including Ozzfest 2006) to record the latest CD "Colors" (2007) and are performing with 3, Opeth, and Dream Theater on the "Progressive Nation '08" tour throughout the spring & summer.

I had a chance to speak with Dustie recently. Check it out!

Well aside from the obvious, I'm in another band called "Glass Casket" and a 80's synth rock band called "Vena Cava". Well the Vena Cava thing is something I've never done before. It's not metal, it's soft, and sexual. Hehe!

I'm proud of every project I've ever been a part of. It shows how you've grown as a musician to have a timeline of music. "Color"s is the most well-rounded example of all of our musicianship, I'd say, but I'm pretty fond of guest appearances I've had on friends band's records.

Me and Paul both use Ibanez guitars. Custom and production models. Mostly S series. We both use Mesa Boogie Amps.

Paul- Rackmount Dual rectifier with Mesa 4x12 and Port City 2x12. Me- Roadster head with Custom Orange 4x12 and Port city 4x12 We both have somewhat extensive pedalboard setups, I guess. Lots of cool little things in there.

As for my favorite piece of gear.. I like all my stuff. Guess that's why I play it. Hehe! Just for shits and giggles I'll say my Custom S is probably my favorite.

Listen to a variety of music because ultimately what you listen to the most is what's going to come out in your playing.

To take over the world.

8) Dustie, many guitarists would find playing in a band like Between the Buried and Me a monster challenge, but you manage to play for three bands (Glass Casket music is also very challenging). How do you manage that level of musical intensity?

It's not too intense really...hehe! It's pretty natural I guess. I grew up listening to intense heavy stuff all
the time so I'm pretty used to playing it.

9) Two words: Butter Dolphin. Can you tell our readers about that?

Hahahaha! Wow...uh, me and some of my friends back home used to sit around and make up funny animal names. That one was one of my funnier ones. It's hung around over the years. Some people call one of my guitars the butter dolphin because it's bright yellow. I dunno...