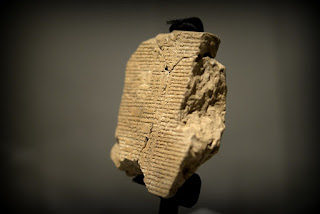 This story is actually from 2015, but it bears spreading the news....

Published on September 24, 2015
The Newly Discovered Tablet V of the Epic of Gilgamesh
written by Osama S. M. Amin

I was taking photos in the main hall of the Sulaymaniyah Museum and came across a display case containing a small clay tablet. The description beside it said the tablet was part of the Epic of Gilgamesh and a fragment of tablet V. Immediately I thought it was a ‘replica’ as the description was superficial. It did not say the tablet was genuine, that it was newly discovered or even told about the many new pieces of information it had revealed. 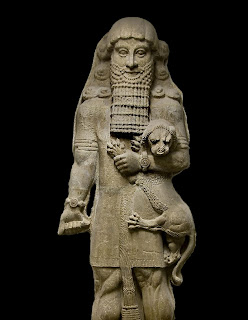 After the US-led invasion of Iraq and the dramatic looting of Iraqi and other museums, the Sulaymaniyah Museum (directed by the council of ministers of Iraqi Kurdistan) started an initiative. They paid smugglers to ‘intercept’ archeological artifacts on their journey to other countries. No questions were asked about who was selling the piece or where it came from. The Sulaymaniyah Museum believed this condition kept smugglers from selling their merchandise to other buyers, as they would have otherwise done so "with ease and without any legal consequences.".....