The Truth About Learning Guitar

Everyone wants to learn to play guitar.

Okay, not everyone, but if someone walked up and said they had a magic button that, when pressed, would magically bestow guitar abilities, you'd be hard-pressed to find someone who wouldn't push that button. Whether it's the dream of shredding in front of a packed stadium, the idea of strumming tunes by a fire pit with friends on a cool fall evening, or the desire to strengthen one's mind through music, playing the guitar is a skill that's on many people's bucket lists. 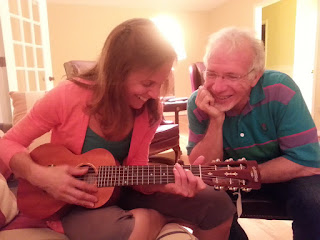 Learning guitar isn't as easy as pushing a button, but the ability to play simple songs, something most anyone would like to be able to do, is far more achievable than one might think. Obstacles do exist, and overcoming them is the cornerstone of effective learning approaches. As with most things, there's a right way and a wrong way to do this.

The advertising, marketing and publishing industries and ever-popular YouTube videos collude to promote false ideas that have become commonplace in the guitar industry. While on the surface, these sources ostensibly provide easy, do-it-yourself solutions to someone wanting to learn guitar, they are ultimately designed to do one thing – generate sales.

The outcome is predictable – the vast majority of learners come to the realization that the only realistic way to progress as a guitarist is to have a teacher to guide them. This is where the selection process begins. It is also the point where many students unknowingly determine whether they will or will not achieve their goals as a guitarist.

But there's a problem: Students considering a guitar instructor rarely know what attributes to seek out. It is a common misconception, for example, that a person who is a good guitarist will also be a good teacher. This is simply untrue. In fact, this same misconception often exists among players themselves. A teacher must be reasonably competent as a player, but playing skill is often mistakenly presumed to be directly proportionate to teaching skill.

The result of this mentality is detrimental to the teaching/learning process and is the core reason that many guitarists attempting to teach fail to help their students reach their goals.

New students often lose their zest after learning to “play a few chords” but never seeing the progress they hoped to make before beginning classes. At the SDML Academy of Guitar, our core mission is to use our students’ strengths to reach their goals and find their success. The outcome of this approach is rapid (and most often immediate) progress and achievement.

Most guitarists attempting to teach students base their approach solely on the way they learned themselves. Unfortunately, the “it worked for me” mentality brings about a number of barriers to progress. Students are limited to the instructor’s personal playing style. They often learn only songs that are in the instructor’s comfort zone. This alone is a huge fail in the process of student learning. 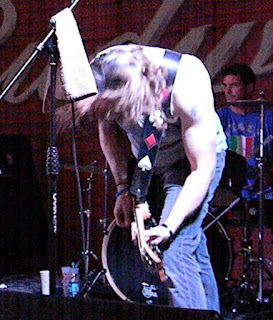 Students are motivated by their own tastes, styles and goals. Among the many ways to extinguish a student’s passion for learning guitar is directing a student to sight-read tablature, while repeating the same songs endlessly, and then chastising them for not practicing those songs enough when they struggle. And this is, sadly, a pervasively common approach in the practice.

Riding shotgun with the aforementioned “I learned this way, so I teach this way” approach is what can be thought of as the “music theory method.” Guitarists who have earned music degrees, even music education degrees, attempt to replicate these courses during instruction. Students often find themselves feeling overwhelmed and frustrated, as they learn standard notation and how to read music when the real goal was to learn to play guitar.

(Standard notation is, far and away, the BEST way to communicate musical ideas in writing, but it is a POOR substitute for learning popular guitar. If a student can recite the circle of fifths and knows the difference between a quarter-rest and a fermata, but can’t play “Smoke on the Water,” that student will likely have a problem as a guitarist.)

Any decent instructor is fully aware of these musical concepts and capable of explaining them to any student who wants to know. Yet the primary focus should be to teach students to play the guitar the way they want to, building from their personal tastes, learning styles, and strengths.

What makes SDML’s teaching method unique from the strategies used by other instructors? The answer to this question lies at the heart of everything we do.

Simply put: a solid instructor follows a solid system, one that is structured, logical and comprehensively progressive, while incorporating spontaneity and personal interests to keep students excited and engaged.

Allow me to break these concepts down. 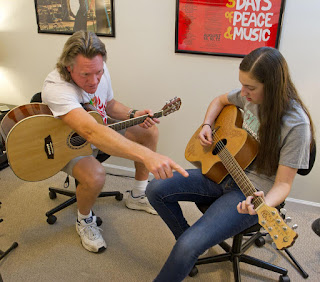 Structured systems build on levels of accomplishment in order to keep a learner aware of his or her progress. At SDML, not only do the instructors know where learners stand, the learners themselves have a solid understanding of this as well. Our use of instructional rubrics allow students to see where they began, how they are progressing, and what goals they will want to meet to reach the next playing level.

Logical systems are critical to student progress. There should be specific reasons for learning each scale, riff, technique, song, concept or philosophy. Students spend their personal money and, more importantly, precious time to reach their goals. An instructor should never walk into class unprepared and should never “wing it” at the student’s expense. While planning courses, SDML’s instructors begin with the end in mind and are able to explain the reason each criterion has been presented.

Comprehensive systems include material for beginners through advanced, professional-level players and span most genres and playing styles. If a system can take a student only so far, it isn’t comprehensive, and the student will quickly run out of new things to learn and improve upon. Good systems are built to adapt and grow with the student.

Progressive Systems contain information that is built upon and connected to other criteria within the system. This idea of scaffolding is key to a student’s success. A piece of instructional material should not simply exist on its own in a vacuum; it should be relevant to something the student has learned or something that student will be learning in the future. 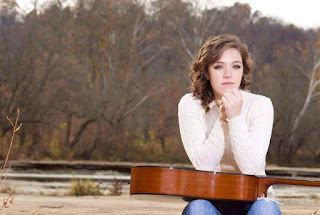 SDML's “SAGE Recognition” and “Guitar Synthesis Certification” programs contain a wealth of chronological and component-based knowledge with common connections throughout, and spans a breadth not seen outside collegiate-level courses.

But let's get real for a second.

On the whole, guitar instructors have, unfortunately, earned a reputation that often disappoints. Students have become accustomed to the stigma of instructors who cancel with indifference, show up at the last minute, and basically consider you and your lessons to be easy side income to subsidize their music career.

The philosophy of the SDML Academy of Guitar is markedly different. Our ideology mandates placing our students’ goals first, and that an instructor's standards for effort should be directed inwardly, rather than merely laying it at the feet of the learner. Students should be able to trust that their teacher will not cancel for a better paying gig. No one should be made to feel that they are anything other than a top priority to their teacher.

(From a practical standpoint, both for personal accountability and to guarantee commitment to students, SDML prefers to bill private lessons by the month, rather than by the lesson. The 8-week courses are also paid in advance. When billing in this fashion, we are committing to our students that we are accountable and will be present to help them meet their goals. In the case of an unavoidable cancellation, students will be provided with an equally qualified sub if at all possible and, if not, a makeup session will be offered.)

At SDML, we have one goal: to teach students to play the guitar as quickly as possible. 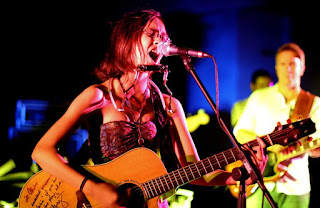 At SDML, we believe that strong core initial instruction is only the beginning for many of our students. We actively seek to offer students copious performance and growth opportunities such as student recitals, guitar jams with other students, direct connections to the music industry, and a website (http://www.SDMLguitar.com) providing access to an abundance of useful information.

These concepts represent the bedrock of the SDML Academy of Guitar. The organization strives to maintain these principles and apply them at every level of instruction and participation in local communities across the country. Certified SDML Instructors are not only held to the highest standards of knowledge and competence in guitar, but adherence to these precepts of instruction and mentoring for our students.
Posted by Paulie at 18:18