I first experienced Blind Dog Gatewood a few years back at a multi-artist gig in Louisville, KY. By my reckoning, he stole the show. No one was expecting this mild-mannered guy to explode when he hit the stage...but he did. Exploded a delta-blues fury of strings, harmonica, and vocals that left the crowd stunned and amazed. 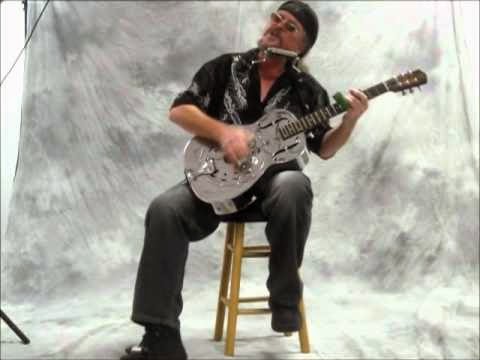 Hailing from Detroit, MI, Blind Dog has been a professional performer and guitar instructor all of his adult life. He is an award-winning one-man act who has polished his chops in places as diverse as the Sierra Foothills, the Mojave Desert, Mississippi Delta and the streets of New Orleans. In September 2002, he took the first prize in Colorado at the Telluride Acoustic Blues competition. First place winners are honored with a performance on the main stage the following day at the Telluride Blues and Brews Festival for over seven thousand attendees. That same year he won the Kentuckiana Blues Society’s Blues Challenge out of Louisville Kentucky and represented the Society at the International Blues Challenge on Beale Street in Memphis Tennessee. In 2004 “Blind-Dog” was a Finalist for the first Annual International Acoustic Music Awards (IAMA) in the category of AMERICANA/ROOTS/AAA, for his song “TELLURIDE”. In addition, a Simi finalist in 2006 in the International Song Contest (ISC), Blues category, for his song “Monkey On My Back”.

You can visit Blind Dog at Reverbnation.

I had a chance to chat with Blind Dog recently. Check it out!

I have Been performing as a Duo and with a Group, we play blues and blues based Rock. The Duo is called Rigdon & Gatewood and is an acoustic street corner style blues Show, we have been playing festivals, private parties and our own street corner in Owensboro Ky. Our band is an electric blues group with a bass player and drummer which perform as a duo called the Hi-Rize Hillibillies. Rod Austin on drums and D.S. Lloyd on bass. They play instrumental jazz. I am also working on a full blown CD of my original material which consists of songs I have written in the past 20 years produced with multiple instrumentation and some guest performers. I have been working with Scott Brown at Ashbrooke studios in Evansville IN, which is where my latest CD "Blind-Dog" was recorded.

I play alone and acoustic most of the time and this is a little different using other people to get the job done.

3) Do you have one project you are most proud of as a guitarist?

I think my newest CD "Blind-Dog", this is recorded in studio live no overdubs direct to master all at once no stopping. I think this shows my acoustic show in its best Light.

I use Digitech a rp255 and a Digitech Rp 350 Multi Effects processors when ever possible, and I use a Digitech Jamman Solo for My looper. My guitars are a Martin 1997 0028 custom, with Fishman electronics, My dobro is a Dobro brand 1991 model 90, my electric is a Mexican Strat with Texas special pickups, , relic copy of a 1952 Stratocaster. May Harmonicas vary but my favorite of the shelf harp is the Hohner Crossover marine Band. I will save my slide stories for in person shows. My cigar box guitars are both made by me, one two string resonator I play Hawaiian style, and one Three string I play bottle neck guitar style. both of my Cigar box guitars are fretless the two string is my own style made in 1998, and my three string is made using ideas I have seen other people do including James “Super Chickan” Johnson and Johnny Lowe.

5) Who would you site as early influences, and who are your favorite new players?

Ted Nugent, The Doors, Johnny Winters, John Hammond, as for new players I like Alvin Youngblood Hart, and Lighting' Malcolm.

Stay away from direct coping of other peoples songs and styles of playing, get the basics and get Creative.

I would like to spend more time in Memphis, Clarksdale, Helena and then go to Europe.

8) Thanks for talking to us, Blind Dog!