"Isn't it a Funny World Nowadays?" by Caitlyn Waltermire

part 2 of 3 installments- read PART ONE

Nearly everyone alive remembered when the streets felt different, because the rise and fall of the Automated Revolution happened so quickly. 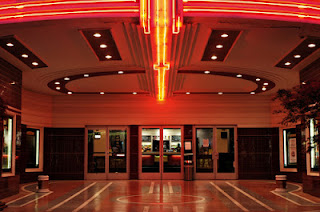 A pretty couple attending a movie remembered the neon lights outside and the slick paper ticket stubs and the films that generally played without a hitch. So it smarted when the light tubes buzzed weakly or not at all, when the person shaped ticket-taker at the window didn’t understand their request because it wasn’t worded exactly and they were forced to settle for the showing it gave them, when the artificial butter ran down the side of the carton because the concessions-vendor missed the popcorn, when the lobby tile was greyish with grime that the tile-cleaner skimmed over, when the film was alright were it not for the failed audio sync and persistent grain from a dirty lens.


An old man whose greatest joy was stargazing on a small peak outside of town remembered a sky like the velvet lining of a jewelry store case, for stars to sit upon and be appreciated. Now the city was permanently lit, rendering the night a bruised purple and the stars invisible.

A mother and father remembered sending their first child through elementary school, its bullying and laughter and fingerpainting with a young, idealistic teacher called ‘Ms.’. Their second child was shuffled through a series of soymilk-colored rooms with dirty corners (because tile-cleaners were round) for pre-filmed videos and pre-set books and blocks.

It was not as shiny as promised, but with the hours of free time, a few people discovered books and inventions inside of themselves that might have stayed hidden forever. Most of these were attempts at bettering the machines the government had gifted them. Publishing houses and patent offices were flooded with various attempts at genius from three or four thousand people. And the three million or so people who were left?

Tom hailed a taxi and cringed as it came to a horrible, squealing halt on its metal rail. It was a small cringe contained behind the ears, (he was used to it by now). He thought about what he had told Fran- everything was as true as it needed to be and the point was that he said it- and about how fantastically tired she looked. But the marvel was how fantastically arousing he found her. She was no longer the sparky, taut-mouthed girl who wanted everything he could get. She grew deeper with need; though he tried to cajole her into disregarding it, there was a happiness about her, that crazy woman. She was pleased with herself, scared for her life and still pleased, and this decidedly un-Franlike attitude excited him hopelessly.

He stepped back for the man inside the taxi to get out, a middle-aged Italian who exuded heat and bluster, making him appear larger than he was. His sleeves were rolled up to the elbows and his arms were black with hair. There were prominent ink stains on his shoulders; Tom had no idea how that happened. “Excuse me,” Tom said, for no particular reason. He was drawn to virility in both sexes. That part of his nature felt rather limp. But as an artist, he felt it an honor to observe in others what he didn’t have time to develop in himself. Someone must watch and record, he thought, otherwise, who is everyone performing for? Who will remember them? He felt like a holy man, flogging himself and going without, sacrificing a large portion of possibility so others could display their strengths and feathers. 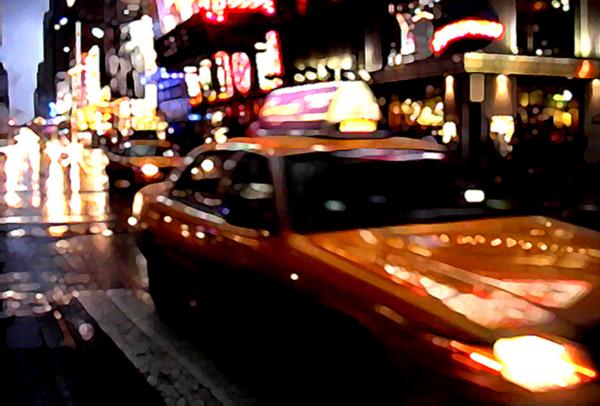 The cab-driver, no more than a metal pole with a spherical head for appearance’s sake, asked, “Sir, are you interested in this taxi’s services?”

The man looked at Tom and unknowingly lodged a shard of lightening into his back. Tom tried to look back and eat him with his eyes, so he wouldn’t forget.

It wasn’t just virility he had; it wasn’t just the dogged streak of an American. He was angry. He was alive. “Sir, are you interested in this taxi’s services?” When he moved, it was with every muscle and intention, and when he looked, it was as heavy as a falling tree. There was something incredibly primal about him- “Sir, are you interested in this taxi’s services?”- incredibly aware of his humanness. The nagging beauty was that the man seemed unaware of it, this quality that was so old that Tom doubted it could be caught in a photograph.

He opened his mouth to say something; he hadn’t a plan but generally when he opened his mouth, something effective came out. “Sir, are you interested in this taxi's services?” The man saw nothing of value ; he turned and walked away, taking up only two feet and the entire sidewalk at the same time. His elbows pointed slightly away from his torso as though he would appreciate gently hugging to death whatever it was that had made him furious. People who passed him felt him as well, to a lighter extent, affording him quick second glances. “Sir, are you interested in this taxi’s services?”

A cab driver with any self-respect would have cursed at him and driven on. This one could buzz its phrase almost forever. “Yes, thank you.” Tom fingered his jeans thoughtfully. His heart was heaving and he rode the sensation into artistic thoughts. He would go home, perhaps snap a few photographs and develop the ones incubating in their tubes. He wasn’t a writer by trade but an idea for a novel had been rattling around in his head for days, and every time he pitched it to a friend, they chuckled politely enough. He might put it to screen and see how it looked. He also might play some badminton.

For a second, Tom wondered what it would be like to be a person so full of layers and accomplishments that he was impossible to look through as the man had looked through him. Then he realized he would never know, and bore the artist’s burden with admirable forebearance.

Caitlyn Waltermire writes short stories and songs as well as acts onstage and film. In her spare time, she plays with flowers.