I knew there was something incredible about this guy, Tony Smotherman, when I got a call from shred-god Francesco Fareri. Fra said, "You must listen to Tony Smotherman. You will want to interview him for your series.". 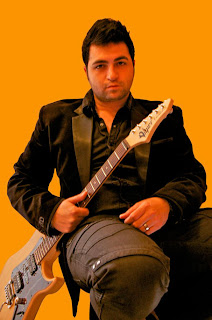 
Born in Athens, Greece, Tony began classical guitar lessons at a young age. Soon after his studies of classical masters like Bach and Sors, he became interested in modern masters of electric guitar like Yngwie Malmsteen, Shawn Lane, Vinnie Moore, and Marty Friedman. A move to Florida and a hook up with bassist Andy Haney and drummer Bruce Royal, and Tony Smotherman is now on his way to big things.

Currently, Tony teaches guitar and gigs the clubs in the Jacksonville area, and has played with everyone from Artimus Pyle (of Lynyrd Skynyrd) and Banner Thomas (Of Molly Hatchet) to guitar wizards Neil Zaza and Rusty Cooley. He has just completed an instructional CD-ROM (CFH) and released his debut CD, "Embracing the Spirit" - an inspiring collection of trax that demonstrate a depth of knowledge and style that makes for a spectacular sonic journey.

Tony (visit his site HERE) sat down recently and answered a few questions for us. Check it out!

I just finished my first cd entitled "Embracing the Spirit". I worked with drummer Bruce A. Royal and bassist Andy Haney - both of whom contributed their great talent into my project. The album is laden with lots of different styles of music, Indian-esque solos, lots of melody, and quite a few shred parts. I just completed my CD-ROM for "Chops From Hell"; it's an instructional that has lots of examples in alternate picking, string-skipping, legato, tapping, and arpeggios. It was a lot of fun to do and with practice, these licks can be put into use and the player can gain a lot of info throughout.

Well, a few years ago I did a 4 track demo. My technique was not very polished at the time, but every few months I listen back to it and see how the phrasing and technique came along. I could see little bits of what was going to happen with my playing but I am by no means even close to my goals as a musician.

I didn't get into this knowing it would happen, but its a quite funny story. I went into the studio where I recorded the CD and one of the members of the famous classic rock band Molly Hatchet was in there helping with the mix of the new live album in Europe. I was asked if I sing. I said well, not really and then he said can you sound drunk? I said, well I can try but what am I getting into? He said well the crowd isn't loud enough on the sing back when the singer asks them to sing the verse, so they tracked me 6 times and put some reverb on my voice. I listened back and sure enough its distinctly my voice on that track singing the verse as the crowd, so I think that was a pretty funny project if you could call it that quite funny!

As a Peavey endorser, I only play Wolfgang guitars live, also my 2nd most used guitar is a custom rg560. Amps: Line6 Pod Pro (for studio). Live I play a 50 watt Marshall with a very rare overdrive pedal that I have no idea what it's called. It's been used and abused so much, that I can't see the name, but it adds so much to the overall sound that I need for shredding and other playing. I also endorse DR Strings.

Early in the beginning, I loved listening to Jimi Hendrix. After a while I heard Yngwie and loved his stuff. Marty Friedman was a huge influence and eventually the direct impact they had on me started to vanish and just little things stayed with me, like certain bends, or a feel. Other than that it was important to me to know my own self as an individual. Newer influences came in later on like Derek Taylor, Rusty Cooley, and Shawn Lane. These guys push me over the edge these days.

My advise is try to explore the instrument without worrying about trends or what everyone else is doing. Do what you want to do and by spending lots of time with your instrument you'll find so many things hidden in there. But you have to want to explore. Try to play many styles of music, listen to players of other instruments, and try to mimic what they're doing. It can lead to lots of great new ideas!

My goals include landing a record deal with a great company, touring the world, continue to record and perform original music, and most importantly to grow as a musician every day with no boundaries regardless of how the current or mainstream music industry stays. I love music and I wanna share that passion with every single person I'm able to reach as long as I'm able to do so.