Someone once told me the 1990s were the "Extreme Generation". Clearly that is not true, because Billy Idol was on vacation. But now he's back...and not alone. The team that made some of the best music in the 1980s - Billy Idol, certified Guitar God Steve Stevens, and super-producer Keith Forsey - is back together with the best rock-n-roll record so far in the 21st century: Billy Idol's "Devil's Playground". 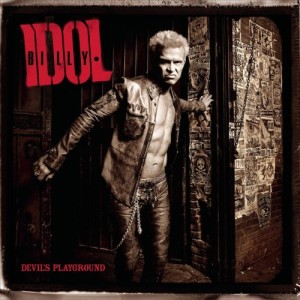 With 13 songs of hard-driving rock-n-roll rhythms and a fearlessly up-front guitar, the stage is set for Billy's surprisingly wide-ranging vocals. The album opens with the fast-paced "Super Overdrive", which finds Billy not only growling out his signature sound, but expanding into a higher range than we've heard since the days of Generation-X. Also of note is Steve's incredible guitar work - ripping licks and fast turns and that "Rebel Yell" lazer-beam! Next up is the punk anthem "World Comin' Down", which reminds us for just a moment of "Dancin' With Myself", but then veers off with Billy again opting for a change in vocal style that will keep you unbalanced but happy, and Steve laying down some brilliant guitar flash.


The 3rd track, "Rat Race", will kick you in the teeth until you submit. Opening with a contemporary beat, Steve slides in oh-so-smooth with a gorgeous acoustic guitar to pave the way for Billy to sneak up on you all quiet like...just before the explosive chorus. This song is other-worldly good, folks. Billy's voice is stronger than it ever was and Steve has gotten even better.

"Sherri" is, to my mind, another perfect single (the first single is track 6 - "Scream"). An up-beat rocker that stands as a stark contrast to most of the rock found in mainstream music, complete with sing-along chorus. It's followed by "Plastic Jesus", which is simultaneously dark and up-beat (like many a classic rocker) and finds Steve fusing rockin' sounds with country licks in a manner so cool the only proper comparison is guitar legend Keith Richards (Rolling Stones).

The next track, "Scream", is reviewed HERE. (posted below) In summation - awesome!

"Yellin' At the Xmas Tree" is an absolutely hilarious look at family dysfunction that will never become a holiday standard - but that's OK, 'cause we love it! "Romeo's Waiting" blasts out of the speakers next with plenty of surprises (including wicked wah-soaked guitar solo), with "Body Snatcher" coming in hot on it's heels - a radical contemporary groove that hints at techno AND the old west (go figure!). This one is classic Idol fair, and Steve's guitar will shock even the most hard-core guitar hero.
"Evil Eye" eases in slowly with the band building tension behind Billy's crooning for a song that drips cool, while "Lady Do or Die" goes western in a sort of Johnny Cash meets surf fashion that will please fans of Chris Isaak and Brian Setzer.

The last 2 songs are very much acoustic guitar driven. "Cherie" jumps out with a simple but effective groove with a Neil Diamond style sing-along chorus while still retaining that Idol punk edge, and "Summer Running" is a perfect fade away for a fantastic rock-n-roll record, building slowly from reminiscence to full-on electric power jam and falling back again.

Bottom line: Billy Idol is back with a powerful voice, modern spice on a classic sound, and great song-crafting with his partner Steve Stevens. Steve runs from velvet-smooth powerchords to acoustic beauty to electric pyrotechnics that will establish him as the guitar god he is to a whole new generation of listeners who may have never heard this caliber of playing before.


This is the funnest rock-n-roll CD I've heard since 2003's "ELECTRIC GODDESS" by Debra DeSalvo and without doubt deserves categorization as a classic rock-n-roll record alongside "Rebel Yell" and works by Elvis, the Stones, David Bowie, and other legends from the (1950-1980) golden age of rock-n-roll.

Read THIS interview with Steve about the new record, and then go visit BILLY, visit STEVE, and be sure to tell 'em I sent you...

"Scream", the first single from the new Billy Idol CD, opens with the most wicked guitar riff heard so far in the 21st century, and sets the pace for a comeback by Billy Idol that will see him taking over the airwaves with his patented reckless abandon. Teamed up again with long-time pal and Grammy winning guitar god Steve Stevens, this single drips sweat, adrenaline, & attitude.

Straight ahead rockin' drums & bass set a solid foundation for Steve's feedback drenched wailing guitar and Billy's radical voice, which moves from chick-seducing growls & crooning to explosive outbursts during the chorus: "Make me SCREAM all night....gonna get EXTREME...." This track absolutely slams in a "rock-n-roll is rebellious AND fun" kinda way that is seldom heard anywhere. It also gives fair warning - Billy is back, and in a big way.

It also features (gads!) a guitar solo! Classic Stevens fair that mixes classic rock motifs plasma-fused with sci-fi excursions that guarantee Steve the distinction of being the first mainstream guitar hero of the 21st century....no doubts, no contest.

"Scream" is the first single from the new album, "Devil's Playground", which will be released on March 22. You can hear it at Billy's web-site. Stay tuned for an interview with Steve, a review of the CD, and more!