Man, has it really been 20 years since the first Billy Idol record? Since 1982's "Billy Idol", guitarist Steve Stevens has created a huge body of high caliber work with myriad artists of myriad styles and enjoyed both critical and commercial success. 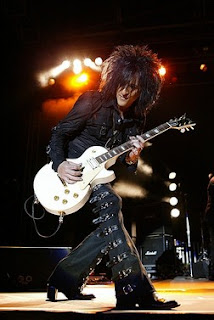 In 1982, Steve played on both the debut Billy Idol album and on the solo album of KISS drummer Peter Criss. He went on to tour with Idol and then entered the recording studio, as a full musical partner with Billy, to create what is still regarded by many as one of the best rock-n-roll albums of all time, 1983's "Rebel Yell". From his incredible & flashy soloing to his subtle use of textural compositions - not to mention his stunning visual antics on videos for the title track, "Eyes Without a Face", and "Flesh for Fantasy" - Stevens helped catapult Billy Idol to the top of the charts and to sold-out concert stages.


By 1986, Stevens was known as a bona fide guitar god and musician extraordinaire, had recorded the theme song (which would later win him a Grammy Award) with Harold Faltermeyer for the Tom Cruise movie, "Top Gun", and was putting the finishing touches on the next Billy Idol album, "Whiplash Smile". Soon after, Steve left the Idol camp and recorded with a wide variety of artists, including Cars frontman Rick Ocasek, the Thompson Twins, Steve Lukather, Joni Mitchell, Robert Palmer, and Michael Jackson. He also stepped in for several over-the-top live performances with Thompson Twins (at the Live Aid concert), Michael Jackson (for the video "Dirty Diana"), and more. In 1989, he released his first solo album: Steve Stevens' Atomic Playboys. By 1991, he was in the studio and on the road with former Motley Crew frontman Vince Neil, and followed by amassing an impressive list of studio credits - from album soundtracks to jazz piano tracking to work with Japanese icon Kyosuke Himuro. In 1998, he recorded the first of two incredible CDs as one-third of the Bozzio, Levins, Stevens project with drummer Terry Bozzio (Frank Zappa, Steve Vai, Missing Persons) and bassist Tony Levins (Peter Gabriel, Carly Simon, King Crimson), dubbed "Black Light Project". He followed that with another huge list of credits, including the BLS follow-up "Situation Dangerous".

Perhaps his most impressive and reaching work, however, is his 2000 solo release, "Flamenco A Go-Go". The album features a fusion of predominantly electronic music stylings with a dazzling array of talented performers (live strings, vocals, percussion, and the like) and, of course, Steve's virtuosic guitar playing. All the guitar work is done on Steve's hybrid nylon-string guitar, and it is infused with a distinct flamenco sensibility. It is an amazing dream of sonic vision and paves new ground...ground we all hope Steve will explore soon on a new solo album.

For now, however, Steve has reunited with Billy Idol to tour and record a new album. If their "VH-1 Storytellers" CD is any indication of things to come, things are definitely looking good! Soon, you can check out Steve's new web-site (www.stevestevens.net), but for now you can keep up-dated regarding Steve's projects at Billy Idol's web-site (www.billyidol.com).

I had a chance to speak to Steve recently, and he answered a few question for TinFoil readers.

At the moment, I am writing material for a new Billy Idol record as well as formulating a concept for my next solo record.

2) How do these differ from your past work?

These days, all projects that I am involved in are started in my home studio - which means I am able to spend a bit more time "tweaking" things.

I would have to say my solo record, "Flamenco A Go-Go". It's the first time listeners really get a chance to enter my own imagination!

In my home studio I use some amp modeling units, as you can get sounds so quickly. These include a Pod Pro, SansAmp, and Amp Farm for ProTools. When recording my keeper guitar tracks, I still use a combination of my old Marshall Plexi heads (I have 6!), Peavey 5150 II, and a vintage Vox AC30. I use whatever guitars the track calls for.

Live, I use the Peavey 5150's and a bunch of stomp boxes mostly made by Mike Fuller of Fulltone.

I have been through stages of loving different players at different times of my life. To me, Jeff Beck still is the most expressive soloist in guitar. Steve Howe in the early days for his amazing use of styles other than blues. Robert Fripp. Curtis Mayfield for his songwriting.
Currently, I'm listening to Sigur Ro's.....amazing band. Lots of electronic stuff...Groove Armada.

Listen to styles other than what you naturally play. Listen to the greats...Miles Davis, Burt Bacharach, Debussy.....all the stuff you thought only your folks dug (hahaha!!!).

Billy Idol stuff.....and I would like to get more involved in film music.

8) Thanx for talking to us, Steve!