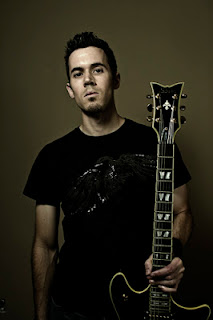 As the "Guitar Gods" series progresses, we'll cover both established gurus of guitar as well as new, unheard of guitar heroes in waiting. One such new hero is Joel Wanasek. Joel is a man wearing many hats: Solo artist, guitar instructor, webmaster, and guitarist for the metal band Dark Shift. Joel Wanasek: Remember that name, folks, because with his musical knowledge, incredible technique, writing skills, and passion, he's gonna be a major player on the music scene real soon!

Currently, Joel is working with his band Dark Shift (www.darkshift.net), who will be in the studio recording their debut album in June. Joel (lead guitar) and Lewie (vocals) started the band in late 2000. By June 2001, they had added Brett (bass) and Tommy (drums) and scored a deal with the indy label AJA Records. Keep your eye on their web-site for live dates!


Joel (persona data available at www.joelwanasek.com) has also recently released his solo (demo) disc, which has many of the trax to be released on his debut solo album (also on AJA). In addition, Joel is webmaster and primary instructor of "Insane Guitar" (www.insaneguitar.net), a web-site that offers FREE lessons to guitarists of every level, from a talented group of instructor/performers. Insane Guitar is also an excellent resource for musicians, with links to free music notation/tab, MP3 downloads, magazines, other guitar sites, and the like.

2) How do these differ from your past work?

Well, as for my solo stuff, it tends to be a lot more in the neo-classical genre than my previous works. It's a lot more aggressive sounding, and I've put a lot more concentration into writing some really driving and heavy riffs so the music has some balls to it. I figure that if people don't like the fact that there aren't any vocals, at least they will be able to turn the music up and rock you to it. The material with Dark Shift is also a lot more aggressive sounding than things I've previously done. Dark Shift has a thrash metal sound.

Definitely my latest solo demo that I just finished. I say this because I engineered it, mixed it, and mastered it in my own home studio. It was an interesting learning process and I think it turned out great for not being done professionally in some million dollar studio. Another reason that I'm most proud of it, is because it's got my best playing to date.

My earliest influences were Randy Rhoades, Satch, Vai, and then Yngwie in that order. My favorite player nowadays is Michael Romeo of Symphony X. The man is simply amazing technically and compositionally. Just listen to "V" by Symphony X. His playing is mind blowing! I can't say enough wonderful things about that Michael's playing. Some of my other current influences include Neil Zaza, Joe Stump, Shawn Lane, Jason Becker, Rusty Cooley, and Lucca Turilli of Rhapsody.

Well, just because I'm a shameless self promoting bastard (laughs), go to my award winning guitar instructional site Insane Guitar. www.insaneguitar.net We have some really gifted players who write lessons for guitar and bass there. We've also got a wonderful master class section that covers various thing. The site is updated every month with new instructional columns. You will probably even have some good laughs there too, as we try to write with a humorous edge. Check it out.

I'm hoping to make a carrer out of playing guitar. I'm still in college getting a business degree right now, so it's kinda hard to go all out, but I work my ass off every day and crossing my fingers that things will fall into place. I've been working a lot with my label and producer Joe Puerta. He playes with Ambrosa and he played with Bruce Hornsby and the Rangers in the 80's. Joe is a Grammy Award winning musician. So, between him and my agent, Denny Sanders, were trying to get some stuff rolling.

Hey, thanks a lot for having me! It's been an honor. Good luck everyone in 2002!! If you guys have 5 minutes some time, please check out my website at www.joelwanasek.com. Thanks again TinFoil!
Posted by Skinny Devil at 06:48