Here in our 4th piece in the series, we'll look at Sam Cooke's timeless classic, "You Send Me", which was written by Sam (though credited to Sam's brother) in 1955 and recorded & released it 2 years later as Cooke's debut single. The song met with massive commercial & critical success (it was #1 on both the R&B and Pop charts) and has since been listed on Rolling Stone's "500 Greatest Songs of All Time" list as well as the Rock-n-Roll Hall of Fame's "500 Songs That Shaped Rock-n-Roll" list.
You can also read my tribute to Sam Cooke. 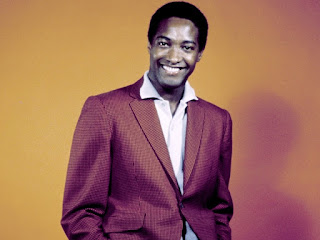 Let's dive in.
Chord Progression:
The song is in the key of G and utilizes the familiar "Doo Wop Progression" (which has been variously called "The 50s Progression", "The Stand By Me Progression", "The Heart & Soul Chords", and even "The Sam Cooke Progression" (since Sam used the famed I -v i - IV - V progression in many of his songs). This translates to G - Em - C - D.
Let's go straight to the chart (stripped to bare essentials).
chorus:
G - Em - /C - D - /G - Em - /C - D - /
G - Em - /C - D - /G - Em - /C - D - /
bridge:
Am - D - /G - - - /Am - D - /G - - - /
Am - D - /G - E7 - /A7 - - - /D7 - - - /
The chart is using the original release as a guide (as opposed to the live versions and demos available) and we'll look at some of the embellishment opportunities shortly.
Melody:
The melody is beautifully simplistic (and purely pentatonic) which is the perfect vehicle for Sam to showcase his amazing signature vocal runs that soar throughout the song. But also note the melody avoids the root note the entire time until the very end of the chorus, and the highest note (E) is never actually sung over the Em chord, so it always creates a tension to push the melody forward. In fact, the entire melody plays out similarly:
The E note is sing over the G chord, the D note over the Em chord, the B over the C chord, and A over the D chord (the only chord where the melody note is one of the chord tones)....meaning the entire melody is always a note behind the chord progression, creating constant tension in each line and then finally resolving to the root note at the end of the chorus.
And the simplicity of the melody makes it both hum-able & memorable, as well as the aforementioned advantage of allowing Sam's stylistic tendencies to fly free throughout the song.
Lyrics:
Also of utmost simplicity are the lyrics, which are direct and to the point...and as such allow him to sneak in multi-syllabic vocabulary such as "infatuation" (if you think that's no big thing, I'd ask how many of your songs feature 5 syllable words) and note the prosody we discussed in an earlier piece: Sam draws the note(s) out when singing "so long" beautifully.
Then Sam adds some spice.....
There are MANY chordal embellishments & replacements available that Cooke's band explored on demo and stage, and they include replacing the C chord with an Am7 in the chorus, sliding the F in between the G and the E7 in the bridge, replacing Am to D in the bridge with C to Cm, and more. Try this version of the bridge:
Am7 - D7 - /G - Em7 - /C - Cm - /G - Bdim7 - /
Am7 - D9 - /G - E7 - /A7 - - - /D7 - - - /
Note additional tension opportunities (for example, in the final bridge line above, moving from 2 beats of A7 to 2 beats of A7b13 before moving to the D7 for a nice chromatic ascent).
And of course, as discussed above, Cooke adds plenty of gorgeous vocal runs throughout the song. But worthy of note: He does so without ever falling into the trap of purely showing off his considerable vocal chops, but instead serves the song throughout.
No wonder this song is still be covered by top artists today.
=====
If you find this lesson to be of value, please consider leaving a small donation!