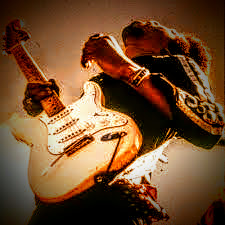 Today, let's look at "signature chords". Most chords, as you likely know, have names that follow the basic triad plus express any additional notes (C or Cmj7 or Cm9 or C7sus4 or C half diminished, and so on). But some chords become so associated with a particular artist or song or whatnot, that they ultimately tend to be known by that name.
Side note: We're talking signature chords in popular music, so I'm not using "named" chords from, for example, the western classical tradition (like the Neapolitan chords or the Italian 6th and so on).

Below, in no particular order, we'll look at a few famous chords.
1) The Hendrix Chord
The formal name for this chord is the E7#9 chord. That is, its a simple E7 chord with the extension 9 augmented (or pushed up half a step). The beauty of this chord in a blues format is that a #9 is the same as a b3, making the chord simultaneously major AND minor (which is a key element of the blues).
Of course, Jimi didn't invent this chord. Its been used by everyone from Debussy to a host of blues & jazz players (in jazz, often used as "horn stabs") before him, but Hendrix put the chord on mainstream radio and in front of audiences like no one else, in part because it often functions, in his hands, as the I (or primary) chord. It featured so prominently in songs like "Purple Haze" and "Voodoo Child (Slight Return)" and live versions of "Hey Joe", as well as strongly implied in other songs like "Foxey Lady", that it became associated with him.
The chord is voiced E - G# - D - G (or 1 - 3 - 7 - #9)

2) The Other Hendrix Chord
Found in Jimi's quieter compositions, from the opening of "Castles Made of Sand" to the latter portion of the chord cycle in "Little Wing" and touched briefly in "Bold As Love" and others, this chord has in recent years taken on the name "The Other Hendrix Chord", and with good cause.
The thing that makes this sound distinct (in addition to the way Jimi slides it around) is the parallel 5th on top. He often grips this by picking up the root with his thumb on string 6, but not always. The diagram below shows without the thumb. Also of note, he usually plays it with no 3rd scale degree, but occasionally drops his second finger down on the 3rd string to pick it up (as he does on the final add9 of "Little Wing").
As Fadd9, the chord is voiced: F - C - G  (or 1 - 5 - 9)

3) The Prince Chord
Prince uses this particular voicing for an E9 chord most famously in "Kiss" (its the chord that plays when all else goes silent). The voicing for this chord can also be heard in a lot of funk, from James Brown (care of the oft-copied but rarely credited Jimmy Nolan) in songs like "I Feel Good" and "Sex Machine" to Wild Cherry to the great Nile Rogers (who often uses it an octave down from where Prince uses it in "Kiss").
The Prince Chord is an "inversion" (fancy speak meaning the root note is NOT the lowest note), which is common in jazz and funk.
The chord is voiced D - F# - B - E (or 7 - 9 - 5 - 1)

There has been a LOT of dispute around this particular chord. However, at different times the parts of the chord has been revealed by both Harrison and McCartney. To be clear, it is physically impossible to reproduce the chord with one guitar (there are 2 or 3 guitars playing with extra notes added by George Martin on piano).
Best I can tell, the notes are - low to high - D - G - D - C - D - F - A - C - G
Harrison asserts it was basically an Fadd9 with a D in the bass (provided by McCartney) and then Martin added the piano. This yields an Fadd9/add13 (aka F6/9). So, for guitar players wanting to approximate this chord, I offer the following solution (in standard tuning):
Voice the chord (lowest with thumb): F - A - D - A - C - G

5) The James Bond Chord (aka Spy Chord)
The theme for the original James Bond movie - 1962's "Dr No" - was composed by Monty Norman and performed by John Barry's Orchestra with the famous guitar part played by British session musician Vic Flick. The Big Mystery, for me, is I can't find out whether the famous chord played at the end was a part of the original composition, part of Barry's arrangement, or improvised by Flick himself.
Fitting that the spy franchise also has a wonderful musical mystery attached - and one that may never be solved!
Variations on the chord abound (as other Bond songs often include allusions, both great and small, to the original theme), but the original performed by Vic Flick is an Em(mj9) played in the 7th position.
The chord is voiced: E - G - B - D# - F#  (or 1 - m3 - 5 - mj7 - 9)

6) The Police Chord
Now often called "the progressive rock power chord" or even "the progressive metal power chord", the rock band The Police often use the add9 as a replacement for the basic triad on top of an otherwise normal progression (which differs from the Steely Dan usage of unusual progressions - see  The Mu Chord below).
Most famously (but certainly not exclusively) used in songs like "Message in a Bottle" and "Every Breath You Take" by The Police, the chord also gets, as mentioned above, extensive use from artists like Yes, Dream Theater, Steve Vai, Queensryche, and many more.
Note that as a "power chord" it typically omits the 3rd scale degree, just as The Police do in "Message in a Bottle". But elsewhere (again, most famously in "Every Breath You Take", as well as others, including in Sting's solo catalog) they add the 9 atop the triad.
In A, the chord is voiced: A - E - B - C#

7) The Mu Major Chord
Popularized and used extensively by the legendary jazz-influenced rock band Steely Dan, this is actually similar (or in some cases identical) to The Police Chord found above. It can be voiced multiple ways, but (as Donald Fagan asserts), regardless of voicing, the major 2 and major 3 must always be side by side (that is, only a whole step apart). Such a voicing always guarantees the whole-tone dissonance that is the signature sound of the chord.
Worthy of note: They used this as in minor chords, also, but often as a mu major chord with the minor 3 in the bass. Example: F#madd9 can be played exactly like an open Aadd9 chord with the added F# in the bass, so the mj2-mj3 tension is part of the relative A major chord - A, B, C#, E -  rather than the half step tension - F#, G#, A, E - of the major 2 against minor 3.
Some of the potential voicings are extremely difficult to manage (I rather like the C - D - E - G - B spelling of the Cmj9, which I perform by "tapping" & holding the low C on string 6 and building the other notes up from there, picking with a non-tap finger). Others are much simpler.
Try open voicing the chord: A - B - C# - E

8) The Purple Rain Chord
Despite the fact that its been used quite extensively in popular music, from "Dog & Butterfly" by Heart to multiple examples by Joni Mitchell, Rush, The Beatles, and many more, it is used front & center in the openings of both "Purple Rain" (as Bbsus2, but often played capo-ed with an open Asus2 voicing) in ways that make it immediately identifiable.
And given how huge a hit we saw in "Purple Rain", its no wonder the chord has become identified with the song. I'm almost surprised that it (like Jimi Hendrix) it hasn't been called "The Other Prince Chord".
The chord (in A, for ease) is voiced: A - E - A - B - E  (or 1 - 5 - 1 - 2 - 5)

9) The So What Chord
So-named for its use in the Miles David song "So What?" by pianist/arranger Bill Evans, who co-wrote and performed with Miles on the groundbreaking Davis album "Kind of Blue" (1959). The chord is typically thought of a root note with stacked 4ths, then capped off with a major 3rd.
Concretely, this spells (from E) an Em11 chord as E, A, D, G, B (or 1, 11, b7, b3, 5). The stacked 4ths is the real flavor of this chord, which gives a very ambiguous sound (perfect for impressionistic approaches to jazz, rock, and the more). Guitarists note: This is exactly strings 6 thru 2, played open, in standard tuning. Makes it incredibly simple to lay this chord in any suitable situation!
Again, the chord (in E) is: E, A, D, G, B (or 1, 11, b7, b3, 5)
(insert diagram)
Aaaaand.....that's it...unless YOU have suggestions for other signature chords I've missed!
=====
Monthly support: https://www.patreon.com/skinnydevilmusic​ or https://www.paypal.me/skinnydevilmusic​ (Pay What You Will)

One-shot support: https://www.paypal.me/skinnydevilmusic​ or www.venmo.com/David-McLean-47 (Pay What You Will)
Posted by Skinny Devil at 16:44