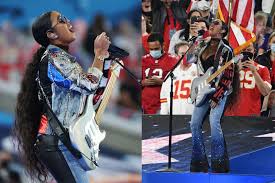 What a fabulous and inspiring version of this 1910 patriotic song. Well, I say 1910, but it should be noted the lyrics were written in 1893 by Katherine Lee Bates (published 1895) and the music was written even earlier - 1883 by church organist Samual A. Ward.

The two never met and the music & lyrics were combined after dozens of other melodies being used with Bates' poem/lyrics. But in 1910, the song was first published as we know it today.

Fat-forward over 100 years and standing tall is guitarist/vocalist H.E.R. (real name Gabriella Sarmiento Wilson, a name under which she released he first music, then switching to the name H.E.R. in 2016). H.E.R. has released 2 albums - 2017's self-titled album and the 2019 release "I Used to Know Her" - and already has 9 charting singles (selling millions of copies), dozens of major award nominations (including 5 Soul Train Awards, 2 Grammy Awards, 2 MTV Awards, & more, with 5 Grammy nominations for the upcoming 2021 awards show), 3 major supporting tours & 2 headlining tours, and appearances on TV from The Today Show to the 72nd Emmy Awards to, of course, the February 2021 Super Bowl.

She performs the song in D (with modulation to Eb in the solo section) in the original 12/8 (written below as 4).

Let's break this down to the basic chords for the song first, followed by the extra spice H.E.R. adds on for her version (which, as an aside, I think is my favorite version ever). 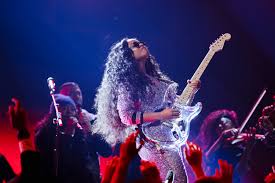 So that gives us a place to start. But hang on to your hats, because she isn't doing just the easy "relative major/minor" sort of chord subs here. She's walking beautiful chromatic lines and exotic tensions and subbing substitutes, as I often say!

I'll likely explain these chord choices in another piece (or reserve for private lessons and songwriting workshops) so we don't get bogged down here, because there is a lot to unpack if we're examining her harmonic logic, which is extensive and sophisticated.

That brings you up to the ferocious guitar solo, so work on that while I work on the remainder of the song. I'll upload the update soon, and do a video to go along with this!