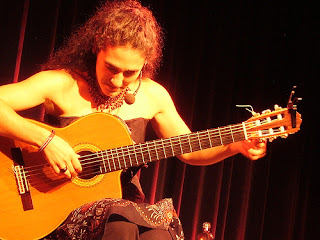 This is the final "lost interview" from the series, originally published at Tinfoil Music.
==========


Badi Assad - have you heard the name?

Badi Assad is a guitarist of enormous talent, a composer of other-worldly sounds, a singer with a hauntingly beautiful voice...and much more.

Born in São João da Boa Vista (Brazil), she grew up in Rio in a musical household (her brothers are Sergio & Odair Assad of Duo Assad). She began playing at an early age, studied classical guitar at the University of Rio de Janeiro and by 1986 had gained the mastery required to win the Young Instrumentalists Contest in 1984. In 1987 she was named Best Brazilian Guitarist of the International Villa Lobos Festival, and toured Brazil, Israel, and Europe. Three albums later, she was voted "Best Fingerstyle Guitarist" in Guitar Player Magazine's annual poll. She has released almost 1 album per year since (including the "La Guitara: Gender Bending Strings", a collection of female guitar players ranging from Jennifer Batten to Rory Block to Sharon Isbin to Patty Larkin). 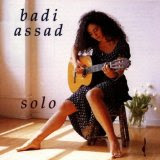 Just finished recording my first DVD. It should be out this year... Setting up a small studio to practice and get ideas down, and working on the next album...

The DVD, well, it's my first, it includes songs from various past CDs, kind of retrospective. It's live, but it is much different from most live DVDs. And that's all I'll say, so I don't ruin the surprise!

As a guitarist? Yes, the CD called 'Echoes of Brazil' (1997). It paid homage to the Brazilian guitar players who were also composers (such as Paulo Belinatti, Dilermando Reis, Sergio Assad, Egberto Gismonti, etc.). It is completely instrumental and shows very well how much guitar is embedded in Brazil's musical and cultural history. 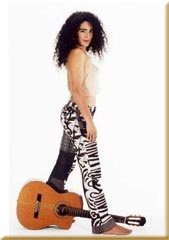 In the studio I use a Fischer classical guitar. I've used the same guitar on all my albums, and besides the great sound, it means a lot to me because it was given to me by my brother, Odair.

On stage, I've been using the same guitar for years now! It is a Takamine/Hirade classical, electric/acoustic. I use a DI and lately have been using a DPA 4061 mic along with it.

Early ones... obviously (and mainly) my brothers and father, but also the Brazilians Baden Powell, and Marco Pereira. 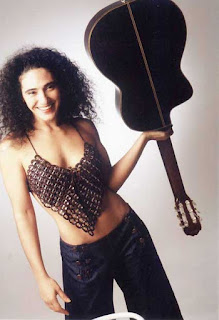 Keep their minds open and follow any road their hearts beat for. There is no journey that is not worth to try even if your mind thinks it is silly. If you believe in what you do the others will as well... be free!

Producing an album with all new material composed with some of my favorite collaborators.


8) You have a remarkable vocal style that compliments your amazing guitar skills. Can you tell us a little about how you developed your vocal style? Did it develop independently of your guitar playing, or in concert with it?

It started while i was trying to reproduce the sounds of the other
instruments (such as percussion and keyboards) that were on my first
album - 'Dança Dos Tons' (1989) - for my first solo performance after that release. The voice came first as an instrument to compliment my guitar but slowly it became more and more present, until a point that it discovered the songs and then the poetry and then, through the years, it kind of developed into its own style.


9) When you were a little girl you wanted to be a dancer. Do you dance now? What do you enjoy doing other than music?

I love to leave my body free while performing. that way it becomes kind of like dancing. I don't have a formal training now, but I do yoga when I can! Ah! I dance - everyday - with my 9 months old daughter Sofia! I love to see a good movie, to go to a waterfalls or the beach... 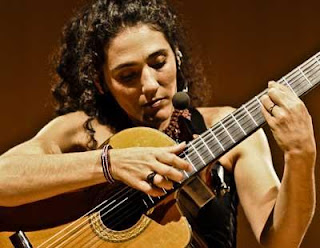 10) Do you play any instruments other than guitar?

Some percussion ones, a little bit of kalimba, mouth harp, didjeredoo...

11) Many people heard you for the first time a few years ago withe the release of "La Guitara: Gender Bending Strings" that also featured guitarists like Muriel Anderson, Jennifer Batten, & Rory Block. Can you tell us a little about that project, and why you chose the song "Preludio e Toccatina"?

Actually, they chose 'Preludio e Toccatina'. I was invited to tour with them and it was a great experience, because I shared the road with the incredible Patty Larkin and Elen Mcllwaine.

12) Is there any pressure to excel coming from such a musical family?

Luckily not! It has been just a wonderful inspiration.

Thank you - all the best!

so cool, thanks for introducing me to another wonderful female gutiarist!