"Breaking Out of the Box" #2 - Alan Robinson 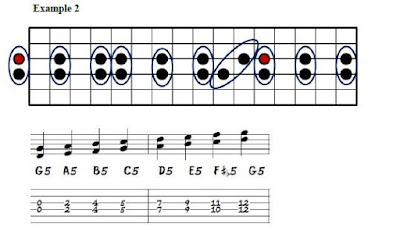 Now we want to assign new “assumed” roots. In this segment we will use the 6th string for our new roots. Below you will note the G major scale as it falls on the 6th string.  (Example 3)

We will combine our inverted power chords and the newly assumed roots to create major and minor seventh chords as we did in the first segment. The following diagram illustrates the new roots but let’s concentrate on the first six tones.  (Example 4) 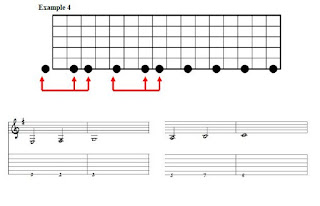 As before the example uses the power chords G5, A5, and B5 placed in a position with the root notes E, F#, and G that now creates an E-7, F#-7b5 (b5 is not present), and G Maj7. As previously mentioned, you do not have to play the roots but you can if desired. (Example 6) 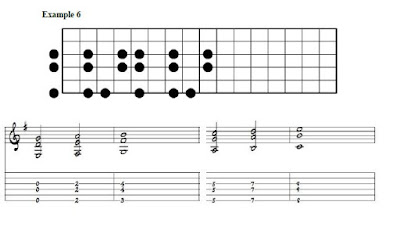 I think that it is again important to point out the pattern/intervals that lay on the fretboard. We maintain the consistent fact that the root of the each of the first three power chords are separated by a whole step (2 frets) and after the third chord in the sequence there is a half-step and then the next three chords are separated by whole steps identical to the first three. (Example 7)

You will notice that the whole step/half step pattern and that they are separated by a whole step between the patterns for both sets and root notes has stayed consistent as well. I continue to point this out to draw attention to the symmetry on the guitar fretboard. This can be used to our advantage! (Example 8)

I hope this was insightful and informing. Again, kind of a basic lesson and information but it is designed to simply refocus how we view our fretboard. Of course we could have simply learned the fingerings for all of the chords in Part 1 and Part 2 the traditional way; however, in the future segments we are going to dig in on the use of power chords in a multitude of ways to create chords and eventually melodic lines that will rely heavily on these basics.

Have fun and create your own exercises because that’s where you start to own the process! 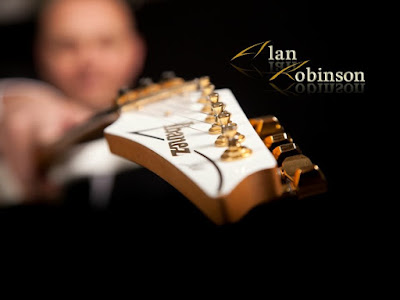 Email ThisBlogThis!Share to TwitterShare to FacebookShare to Pinterest
Labels: Breaking Out of the Box, Lessons, Music