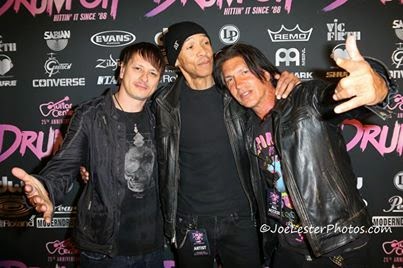 It was at a birthday party for the son of Ray Luzier (drummer of the band Korn) that George Lynch (Dokken, Lynch Mob) and dUg Pinnick (King's X) got the tour of Ray's home recording studio. And it was in that studio that Ray suggested that the 3 get together as a classic power trio.

Fortunately, George and dUg agreed, and KXM was born.

A dozen fiery songs from this "super group" make up their self-titled debut album. Leading off with the anthemic single "Rescue Me" and following quickly with the angry "Gunfight" (see our review of Gunfight), the album of chalk full of odd times, wicked guitar riffs, impassioned vocals, searing guitar solos....an absolute cornucopia of excess distilled down to a dozen 4 minute songs.

The really grweat thing is these guys don;t seem to be doing your typical super-group corporate rocvk thing - they seem to really get along and have a unique chemistry. (See video below of the band being interviewed inter-cut with studio clips of them making "Gunfight").

The album entered at #31 on Billboard's Top 200, hit #1 on Amazon's Hard Rock Charts, #6 on iTunes Rock Albums, and #3 on Billboard's Indie Releases Chart...and there is a damn good reason why.

These guys are throwing it all out there, every song getting everything they have to give.

Rates 9/10 stars on our Rock-o-Meter. Recommendation: If you are a hard rock fan, get this album NOW!

(ed note: You can get more info and buy the album from their label Rat Pak Records. Stay tuned for a "Guitar Gods" interview with George Lynch, coming soon!)