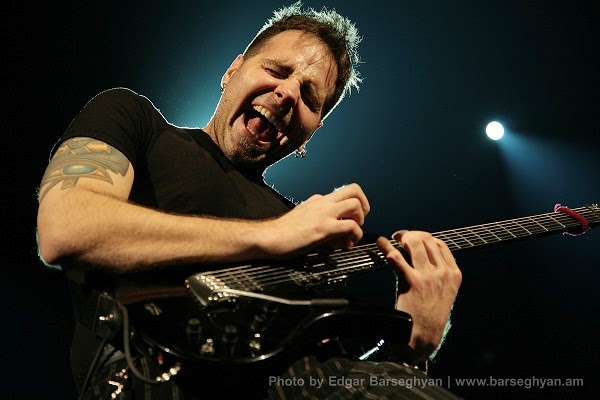 I don't remember how I first learned about Dave Martone (though I think it was on the advice of one of the "Guitar Gods" interviewees like Greg Howe or Jennifer Batten or Marty Friedman or Billy Sheehan...all of whom Martone has played with at some point), but I do remember that when I first heard him I was blown away.

Martone has a super fluid style that seems to at once draw on myriad musical styles and at the same time none at all....somewhere off in the stratosphere influenced by nothing but the intersection of heart, mind, and the musical moment. His technique is flawless, his sound impeccable, his compositions seemingly of some sacred geometry, his improv not of this earth.


Dave Martone started playing acoustic and classical at an early age, followed briefly by flamenco, and then leaped both feet into the world of rock guitar. After school, he secured a certificate in recording engineering from Fanshawe College and then headed to Berklee College of Music as a performance major, where he graduated in the mid 1990s.


Since then, he has conducted teaching clinics at Berklee, music stores, The National Guitar Workshop, and beyond, written for Guitar9.com, hosted The Satcvh Zone with Joe Satriani, released multiple albums on Magna Carta Records, operates his own recording studio, and more.


You can visit Dave on-line, where his site is full of music, lessons, videos, and more,


I had a chance to speak to Dave recently (ed note: this was 2010 and is one of our "lost interviews"). Check it out!

A new record has just come out from Magna Carta called A New World Man. It is a tribute to RUSH featuring many great artists. I did 3 tracks for this record…

Force 10, New World Man and Fly By Night. I am working on the studio producing a select few artists at the moment as well. Also my schedule is booked for the summer doing master classes and seminars for The National Guitar Workshop, School of Rock, Berklee College of Music and the Guitar Workshop Plus.

I am of course working on the next Martone record as well as completing a recent tour of Europe.

Well, I always try and have my hands in a few things going on at the same time. I enjoy the producing and engineering of music as well as the performance and writing aspects as well. I have been doing these master classes for many years. It’s a great way to keep guitar alive and pushing boundries!

Well that would have to be the Martone band. It has been going since 1995 with different members. We have 5 studio albums out, 2 live concert DVD’s and also appear on countless tribute albums. I wish I was touring the world with this band!

In the studio I use whatever the job calls for. In all honesty there are many things… but guitars can range from Les Pauls, Parkers and Strats… not to mention acoustics, and amps from Marshalls to Vanous to Vox. Pedals can be anything that is needed from Digitech to Pigtronix to Tonebone!

Live I have been using the Valvetronix Vox or Tonelab LE. I have recently integrated an EV wireless system as well as switching from a Radial PZ DI. A Digitech Whammy as well as a Pigtronix Envelope Phaser is usually at my feet!Parker Deluxe guitars are my main live guitar.

Favorite new players… would be all my students that are kicking ass… Keston Barker, Chris Turner, Scott Verbeek as well as a few others.

Sure, don’t give up, don’t suck, work hard, be cool and charismatic, have a good sense of humor, and be punctual! You don’t have to be the best player in the world to be working and become very successful!

7) You do a fabulous job breaking down your recording process on the Rush project for Magna Carta on your web-site. I was wondering if you could address several elements throughout one of your own songs? Specifically, can you break down your A) compositional process, B) guitar approach (concepts & technique), and C) recording process for the song "Goodie Squigge Song"? Can you talk specifically about those metric shifts and bizarre guitar sounds?

I will do a video for this…

Part B can be watched here… http://www.youtube.com/watch?v=IIKF_uupk8c

8) What are your future plans?

My plans are to continue to make records/cds etc, and tour tour tour as much as possible. Being in front of audiences is where it is at! I hope to hit other parts of Europe soon as well.