"Guitar Shred Show: The Way of the Exploding Solo - Mr. Fastfingers reveals the arts & secrets of electric guitar to all."

The Guitar Shred Show officially opened on August 8, 2005 and word spread so fast of the amazing "Mr. Fastfinger" that the web-site, GuitarShredShow.Com, has received 10,000-15,000 hits per DAY by guitarists hungry for knowledge. The site, the ultimate on-line guitar school, is so impressive that links to the school popped up immediately on forums like Vai.Com on August 9 - just one day after it's opening!

I heard word of him by the 18th and was immediately and profoundly impressed, and quickly initiated contact with the Guru of Guitar. By the 23rd of August, the site had won it's first award: The FWA Site of the Day (and had long since received an official link from Vai.com). FWA called GuitarShredShow.Com "...totally unique, unforgettable, and very entertaining...superb!".

The guestbook at the site boasts thousands of signatures & kind words from all over the planet. Just a brief sampling of the book revealed admirers from Italy, Germany, Mylasia, Australia, Spain, Canada, US, UK, Holland, China, Slovakia, Brazil, Turkey...and as I write this, it is only August 26: less than 3 weeks since the school's debut!

Mr. Fastfinger is a sort of Samurai Jack meets Jack Butler - a Flash guitar hero spreading the Gospel of Guitar (discipline, passion, and vision). Behind the Guru is the genius of Mika Tyyska (guitarist, designer, animator), who helped Mr. Fastfingers open the school, which resides on the Mountain of the Tapping Dwarfs atop the lonely Isle of Shred.

I have the great honor of conducting the very first interview ever granted by Mr. Fastfinger. Check it out!

"Mr. Fastfinger is the world’s latest guitar-hero. He is a mysterious guitarist, whose past is highly unknown. According to a legend, he left behind his normal life at very young age, and went in search of truth. He found his physical and mental bliss from a desert island and his only luggage was an electric guitar. Devoted to his instrument, he began the search of purity and beauty of shredding. The young boy spent all of his time on training and jamming with his guitar. For many years, the world was unaware of his exploding solos as he kept his volume low. Then Mika Tyyskä (the man behind Elektrik Pyjamas) heard wild rumours about a man with unbelievably fast fingers. After some serious investigating, he located the Isle of Shred and the two finally met. This was the beginning of Guitar Shred Show, the ultimate guitar school on the internet; and the rest of the story is history. What you are about to read is the very first interview of the mysterious guitarist, Mr. Fastfinger."

I give guitar lessons at guitarshredshow.com. My mission is to inspire! 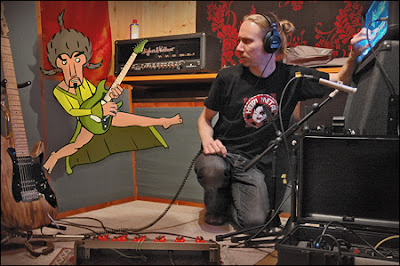 Years ago, after I arrived here, I devoted myself completely to the art of guitar playing. All I did was practice my guitar techniques. After all the studies and research “Guitar Shred Show” is very good project for me. Sharing the knowledge and visions of guitar playing with others is very important.

My ultimate project is to reach the total awareness of guitar playing. I’m in search of a mental stage where I can become one with the guitar. This hasn’t happened yet, but I’ve already managed to get very close. I have special rituals that I go through every night; I hope to share these techniques with others in the future.

I am free from all material desires; I just need an instrument to practice. My main guitar is a special super strat, it was custom made by my little friends from a nearby mountain. It has a double locking whammy bar, two humbuckers and a single-coil pickup. Yes, these pickups produce hot and screaming sound!

5) Who would you cite as early influences, and who are you favourite new players?

When I was a teenager, I paid attention to composers such as Steve Vai, Frank Zappa, Eddie Van Halen, Jimi Hendrix. Now I receive my inspiration by listening to birds and sounds of nature. I also cherish the music by Adrian Belew!

Remember, guitar playing is more than just fast licks and long scales! You have to search for something much higher, something spiritual. Great results ask for discipline! You have to concentrate, play with passion, use your whole body, or you are going nowhere. Let the divine take over, and you will find your own uniqueness. Keep shredding, that’s the power of guitar!

Recently I’ve started working as a session player. The producer of Guitar Shred Show, Mika Tyyskä has asked me to play lead guitar on his Elektrik Pyjamas album he’s working on. This is very exciting time for me!

8) Thanks for talking to us, Mr. Fastfinger!

This has been a great honour!