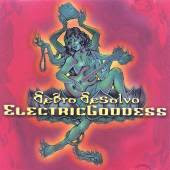 The name of Debra DeSalvo's new album is "Electric Goddess", which sort of throws the gauntlet down, if you ask me. Lucky for us, win, lose, or draw, it's a GREAT show! But then, whaddya expect from a record that opens with a song titled "Demon in the Sack"?

This New York guitarist/singer/songwriter fronts an aggressive 3-piece band (John Hummel on drums and Duke on bass) and plays some of the best rock-n-roll this side of the millennium line. Debra's vocals are gritty and gutty and full of fire, but her guitar is what really takes center stage. With equal parts Ramones, Hendrix, and Earl Slick, DeSalvo pounds away on her Marshall amplified axe and comes crashing into your world.

From the opening track ("Demon in the Sack"), which features some sweeping legato runs, whammy bar antics, feedback, and some kicking double-stops (coupled with heavy hitting rhythms and oh-so-cool), through the finale ("Take it Off" - the theme song to the movie "Stripped"), which features a melancholy prelude and explosive theme backing cynical lyrics and DeSalvo's wicked guitar work, "Electric Goddess" delivers the goods...in spades.

"Get Free" is a touching introspective piece dedicated to Zen Guitar guru Phil Sudo (a friend of Debra's who died tragically in June of 2002) that successfully combines her clean arpeggios with gritty power. The track is followed by "In Motion", DeSalvo's clear voice ringing above harmonic infected power chords, funky bass, and rock-steady drums.

"Electric Goddess" is hands-down the best CD to land in my pile of review discs so far this year. Uber-tight rhythm section, fabulous guitar work (including guitar solos that never degrade into meandering displays of technique), excellent songwriting (grooves that'll make you leap up outta the chair and crash around the room), and a classic "raw" sense of rock production reveals Debra DeSalvo to be a major up-coming force on the rock scene. My only gripe is that the disc features only 4 songs - far too little from this amazing talent!

I'd write more, but I gotta go turn up the stereo! Visit DeSalvo at her web-site for more info!