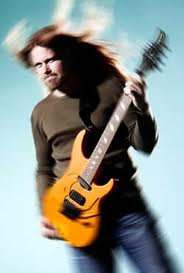 
What can you say about Mattias IA Eklundh? If you've heard him, you are already smiling - if you haven't, you should.

Mattias, Mr. Freak Guitar, is an amazing talent...coming at you with aggressive, funky, bizarre, beautiful music that twists and turns like an electric labyrinth and leaves you stunned but wanting more. With titles like "Faith in Chaos", "When Sam Played it Again", and "(Friday Afternoon) in a Galaxy Far Away", you know you're in for something more than a little different from one of the most original artists you've ever heard.

Raised on Kiss and Zappa, Ia began playing guitar at 13. By 1988, he had joined a band and released his first album, "Frozen Eyes". By 1992, he had started his own band, Freak Kitchen, and their first album, "Appetizer", was released in 1994. 4 more Freak Kitchen albums were released, along with 3 solo efforts and 4 instructional works (audio, video, & DVD), and Mattias can now be found on tour with Freak Kitchen, doing guest spots on other projects (from guest solos to compilations to tribute CDs for Yngwie Malmsteen & Jason Becker), writing an instructional column for Fuzz, and touring the globe doing instructional clinics (from the annual Freak Guitar Camp to GIT).

His web-site features all his Fuzz columns, gobs of scales, lots of free music samples, gig info, news, and more.

I had a chance to speak to Ia a few months back. Check it out! 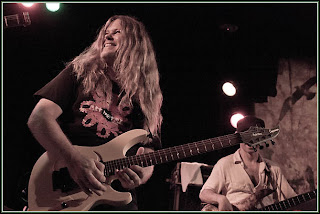 IA: I am just about to complete my next solo album, "Freak Guitar - The Road Less Traveled". It'll be released before summer in some territories and early fall in some. Pretty happy with it. Then we'll go straight into production of the next Freak Kitchen album which will be released in October. Lots to do. (ed. note: These have been released & are available on-line & in stores.)

IA: On "Freak Guitar - The Road Less Traveled" I tried a lot of stuff I haven't tried before. The point of making music is, to me, to break whatever new ground you can, without being weird for the sake of it. To fuse unorthodox ideas with actually listenable music is what give me a kick. The record consists of 23 tracks, about an hour playing-time. If you wanna hear something different, check it out.

IA: I use the same equipment all the way. Laney amps, TT100H, VH100R, GH100L, straight Laney speakers and my Caparison Apple Horn signature models. Nothing else.

IA: In the early years it was Ace Frehley, Eddie Van Halen, then Steve Vai, Joe Satriani. Nowadays I mostly listen to Django Reinhardt and John McLaughlin. I truly dig gypsy jazz and players like Bireli Lagrene and Jimmy Rosenberg.

IA: Stay true to yourself. Let yourself be influenced by do not copy. Get rid of the metronome, stomp your foot.

IA: Release the two CDs I mentioned and go back on the road. Next year I plan to release a beefy instructional guitar DVD + a live-DVD with the band.

8) Thanx for talking to us, Mattias!