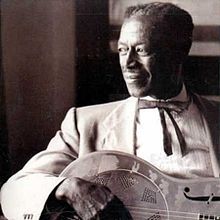 To my knowledge, it started way back in the 1920s & 1930s with acoustic blues players – players who not only sang and strummed, but also smacked the strings and the guitar body to get percussive effects. Unfortunately, the recordings of those days are of poor quality, so hearing more than the vocal and the basic guitar line is difficult.

Flamenco players also occasionally add “guitar body drum” to their playing, though mostly as sparse effects for a bit of spice. In the 1980s, Michael Hedges began popularizing the use of percussive effects along with extensive use of hammered ostinato, slides, and super-articulate finger-picking. Today, great acoustic players like Peppino D’Agostino and Laurence Juber have taken things to a whole new height, with Preston Reed being (in my opinion) the undisputed king of tap-n-slap. 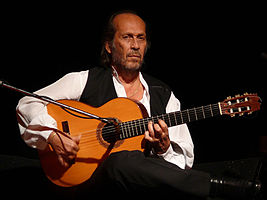 This month, we’re going to look at a few VERY basic percussive concepts for the acoustic guitar, while in the coming months we’ll explore these more and also apply them to electric guitar.

Example 1 has you playing a hammered fret-hand pattern of straight 8ths, with a tapped open-3 pattern on the 5th (A) string. Add to that a pick-hand tap on the guitar body on the second and fourth beats OR, for the more adventurous, tap straight 2s with your elbow on the body. Unfortunately, PowerTab doesn’t allow for body slaps, but I’ve used a 2nd fret tapped harmonic to denote the body slap to help get the timing down.

Example 2 has a free-er fret-hand pattern while the pick-hand accents with a body slap and then taps a harmonic at the 12th fret. Be sure to practice this with a metronome so that your timing is perfect. Again, we’ll use the 2nd fret tapped harmonic to indicate the body slap.

For example 3, think of a straight rock percussion pattern. Experiment with this, playing the dark melodic sequence with the 12th & fifth fret tapped harmonics (as is notated), and then by replacing the harmonic with a body slap, and finally by tapping out the entire rhythm on the guitar’s body. Notice the 6th string (low E) is tuned down to an A for that super-bass effect! Mix up the slaps, taps, melodic sequences, and maybe even add some hammered chords like in the examples above. Stay loose and have fun with it!

It’s worth noting that some players use just their hands while others use fingers or forearms and the like. Peppino, for example, tends to use rocking palm to finger patterns, while Preston Reed tends to combines fret board taps (both single note lines and full chords) with arms and palm shots to the body (watch his alteration of palm and forearm body shots on his track “Blasting Cap” if you have a chance!), while my personal style includes a lot of articulated multiple-finger body accents (finger rolls) coupled with tapped harmonics (especially in the track “DI” which I originally recorded in 1990 ; a video clip of me performing this at a recent guitar clinic will be available on my site soon). But explore these ideas and see what YOU come up with. Also, be sure to visit the sites of the players mentioned herein (which will often lead you to the sites of other great players in a never-ending maze!!!), especially Preston Reed.

You can also check out an interview I did with Preston at TinFoil and listen to his work at his MP3.com site.

Finally, thanx to “EmperorMalignus” of Montreal (and the IG message boards!) for suggesting this article. Keep that feedback coming, guys!
Posted by Skinny Devil at 18:22