Muriel Anderson's ''A Journey Through Time''


When I think of Muriel Anderson's music, words like "exquisite" and "beautiful" and "devastating" come to mind. If you've heard her performances of songs like "Nola" and "Vincent" or heard her compositions like "Sakura" and "After Tonight", then you've certainly been stunned by the beauty and power of her skill. That said, it was with great anticipation that I opened my copy of "A Journey Through Time"...... 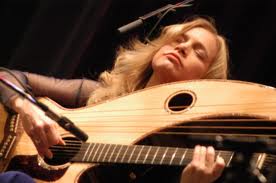 What I got was completely unexpected. First off, Muriel is being quite literal when she says "A Journey Through Time". The disc contains 13 songs, each with a different time signature. The first song is a free-time track called "Owl's Psalm", leading to the second track in 2/4 ("Skirts of Mexico"), traveling all the way to track 13 (in 13/8) called "Baker's Dozen". See the pattern? The liner notes state explicitly, "On a musical journey through the feel and rhythms of every time signature..." and that is exactly what she does; with a mastery of style and technique and emotion that will rivet you to your chair.


"Owl's Psalm" is a gorgeous piece featuring a free-time melody, while her rendition of Manuel Ponce's "Skirts of Mexico" is arranged in 2/4. This leads to an enchanting "Clarsah" (meaning "harp" and played on Muriel's Del Langejans Harp Guitar) which is, for course, in 3/4. When it comes time for track 4 (in 4/4) Muriel slides oh so smoothly into a touching version of the famous Burt Bacharach song "Close to You" (originally performed by the Carpenters).

The rhythmic challenge really begins with track 5 (in 5/4) when Muriel fearlessly leaps into an original composition titled "Prelude to a New Morning", then switches stylistic gears as we hear the opening strains of "Dance for Muriel" (written by her friend Jorge Morel) which features odd tone-cluster stabs and other dissonances woven into a playfully pretty quilt of melodies. Stylistically, she turns on a dime again as the 7/4 "Blues for Macedonia" begins, featuring not only Muriel's guitar, but the clarinet of friend Daniel Lochrie. 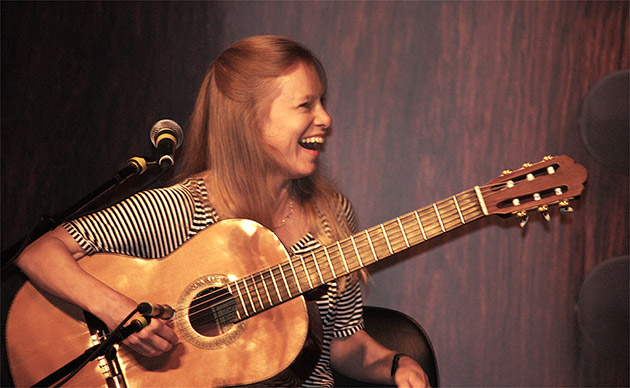 8/8 opens with "Bells for Marcel", which Muriel wrote in honor of the fabulous guitarist Marcel Dadi (who was killed in a plane crash in 1996) and features Muriel's remarkable sense of melody and sweeping harmonics. The ninth track (9/8) is called "The Journeyman" and is the only song with vocals, followed by "Crystal Horizon" in 10/8, which brings us another guest performance by Daniel Lochrie on clarinet. It also contains the most complex rhythmic variations of the collection (but if you tap your foot to the 8s, you'll be OK!), splendid arpeggios, and a wonderfully lilting melody.

Next we hear "The Sight" (in 11/8), a melancholy piece that perfectly reflects the eerie theta/alpha state as we awaken from dreams. A harsh change follows as the 12th track (in 12/8) comes marching in: Sousa's "Washington Post March"! Finally, the exotic "Baker's Dozen" polishes off the set in 13/8 in adrenaline pumping fashion.

Unlike many discs, it is near impossible for me to pick any favorite tracks. Ms. Anderson so skillfully covers such wide stylistic ground that my favorite pieces literally depend on my mood. This is a collection where, at some point, everything stands out as superb. Bravo!

A bit of advice, though: This was released in late 2002 as a limited release. As I write, they are still available at Muriel's web-site, but I suspect not for much longer....so get it now!