"Isn't It a Funny World Nowadays?"

"Isn't it a Funny World Nowadays?" by Caitlyn Waltermire
part 1 of 3 installments

Frances might have been nineteen. She might also have been twenty-eight. Her eyes were black-green like Japanese beetle shells, set upon two pools of dark circles under her lower eyelids and against the bridge of her nose. Her hair was a nothing color, like weak tea or lake water, and the pieces that did not fall across her forehead were swept into a bun, cloudy and pleasing. She was long-boned and had a habit of imitating the laugh of whoever she was with. She worked as the only waitress in the city’s only diner. 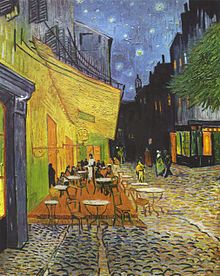 The diner was rather yellow, from the walls to the plates to the toilets. Whether this was from use or intent of design, no one could remember. The spoons were literally greasy, due to incompetence of the dish-washers, and customers got into the habit of wiping their utensils on napkins before using them; (it was better than complaining at a metal face). A television with a very large screen hung on the wall everyone was expected to turn to. Usually it showed speeches or debates or speeches about debates, but today a man had been arrested for attempting to rape a female-looking machine in transit to the office where it worked, and this made for interesting news until expensively-suited people decided to fill all the stations debating the ethics of it. A man chuckled into his pie and said, “Isn’t it a funny world nowadays?” but no one heard him.

Frances was with a different man, the one with peach-colored hair who sat carefully, with toes pointed at the floor, at the table by the door, a choice that she suspected meant a noncommittal spirit, but she was Romantic and always thought small things held greater significance. He kept watching her, expectantly, with a steadiness that made her ill. He looked at her mouth, two thin thin slips of pale ribbon that had never moved anyone.


She smiled carefully, so as to not call attention to them. “Don’t mistake my happiness for life, Tom.”
“I wouldn’t, dear. I really wouldn’t think of it,” he said. “There isn’t anything alive about you.” He took the coffee pot from her and half-filled his mug.

Which was her job. She heard something snap like a handful of uncooked pasta. “Not all of us wear it on our fingers and cars,” she said. “Not all of us drag it behind us like a parade float.”

“I’m never more aware of that than at Christmastime. Or when I eat oysters. Or when I try to sleep before nine o’clock.” Tom smiled with starched-white-collar teeth and it was so fantastic that it was either entirely false or entirely genuine. “Thanks alot.” Her eyes stung with artificial brightness like they had been rolled in sugar crystals. He picked up his coffee mug, cheap thick plastic, turned it around a few times, and emptied it onto the tabletop.

“It didn’t deny consent…” the soft-talking, rather smarmy news anchor said. He was the foil for the crew-cut blonde professor in her boxy suit jacket.

Frances gave a soft hiss and snapped a towel from her apron pocket. She was damming the edges when he leaned into her ear and said, “You smell better when you’re upset. Less like dead leaves.” She slung the towel in his direction; brown drops and dashes appeared on his pale shirt, its expensive silk. “This place has you so petrified- you’re gargoyling as we speak- if you keep making that face it’s going to freeze that way.” His tone stopped her. The coffee stains were a test and she was dismayed that he passed it. Her towel lay spent between them, like a dripping slug. Now she smelled like coffee and onions and old water. “How long do you think you can stay on here, Fran? Three, four weeks?”

“I did something stupid but it was completely on purpose.”

They beheld each other, checking the face before them against the one they remembered. His hair was still lightening, pale- red parted neatly and combed to the side, eyebrows so fair they barely broke up the expanse of his forehead. Intelligence shone from him like his body was an interchangeable lampshade and all that mattered was the bulb inside. “Dear girl,” he said, spreading his hands on the table, his knuckles small white mushrooms. “I left your silly paperback on the arm of the couch, how you had it marked. In half, slowly breaking its spine. I play your music every morning-“

“I play your music every morning as loud as you would, until the bass gets painful.”

She wanted to gasp, a great sucking sob, then push all the bitter watery emotion from her eyes and nose. But she rippled her feet in her sensible shoes that were heavied to the tile and didn’t make any sounds.

"You cared for me," Tom said as though he were chewing on it for the first time. "And I spoiled it." The lack of confession of any love for her did not surprise, but amused her, like watching a baby repeatedly poke his toe into his eye, startling again and again. The entire conversation had happened very fast, just long enough for the slushy drums in the piped- in jazz overhead to fade.

"Yes," she said, agreeing to all of it. She was mad about him, still was, probably always
would be. She remembered his nose tracing a line from her belly to her cheek. "You aren't wearing your ring."

He tapped his fingers. He looked at her heavily, like he wanted to close his mouth around her head. Her throat knotted, and he was really going to do it, he was going to say something genuine. She felt his fingertips drawing her by her tenderest insides. She felt a shift in the earth.

Her breath was very light; she waited.

"No, I'm not." A gently humming tile-cleaner, the size of a shoe, collided with him under the table to collect the coffee splash she missed. Tom jumped. It was comical.

She tucked him behind her as neatly as she could. After another minute of monologue, he left. She walked behind the counter to cut more pie, until the surface was completely obscured by blueberry slices.

The only job worse than working on a battery assembly line was to be the inventory manager. Albert suspected it was his because his penmanship was tiny and square, rather beautiful, the strings of numbers linking together like silver chain. He could not forget anything and handled almost every shipment mentally, sending tiny trucks out to miniature cities in his brain. It was hours of muttering and counting in a warm office without windows or human contact. The walls were papered with small hot air balloons. One time, though he would never tell anyone, he swore he was riding inside of the striped one that hovered directly in his line of vision from the desk. He had made it to five o’clock in the evening, then, without any coffee; a very bad day by all accounts.

He lost the column of figures he had erected in his mind. “What? What?”

Tentatively: “Shall I make you a cup of coffee, Mr. Rowe?”

He shot it a look of contempt. “No. Absolutely not. You do it-”

“-badly. Cream in what? I’m not having coffee.”

He scraped his chair back from the desk in a menacing display wasted on an appliance with no eyes. “Stop it. Stop that.” He smacked his palm on the desk unnecessarily. “Call me Albert. Call me Bertie. Call me a heartless bastard. Or simply don’t call me, you glorified percolator. They could pave a road with your coffee and I certainly don’t want any right now!” The coffeemaker’s coffee was excellent, robust with pleasing notes of nutmeg. This was entirely unfair. “No coffee. Thank you.”

“Sorry to bother you, Mr. Rowe.” The coffee-maker turned itself off with a disappointed blip.

“Goodbye,” he responded, as he always did, without thinking. He walked the perimeter of the office for no reason. Almost every physical action felt without reason. No one wanted his soft body anymore.

Albert’s current employment was nothing short of fantastic. He held onto this stuffy, warm kingdom with resentful tenacity; angry that he should have to, yet unable to do anything else. Liliman’s Battery Co. was the last corporation to have a human employee (aside from mechanics and the highest tier of bosses), and though there were plenty of humans left, he was lonely, in a building without grunts, coughs, and curses. There were only knocks, whirrs, and metallic shufflings when a machine couldn’t turn a corner on the first try.

Sometimes he pressed his palm to his chest and felt his pulse with poignant gravity. Here was the last beating heart of a battery inventory manager. Albert felt a bit like a god and a bit like he was awaiting lethal injection.

It was hot. There was a half-moon of sweat under each armpit and he had already removed his tie. He returned to his chair and his hand left an unpleasant wet print on the paper. The thermometer waited for him on the wall above his head. He swiveled to face it. It was a large, silver box, without buttons, only a screen with red digital numbers.

He ran a hand over the surface of the box and nothing registered. That wasn’t how it worked. “I’m convinced the conditions of my office get harsher by the day. If you ask me, which you didn’t and I’m fully aware you didn’t, I’m also convinced that they’re sweating me out. Ask me why they keep me on if they want me out of here badly enough to drive me mad, slowly, two or three degrees a day.” He tapped it, all over. Nothing. “I don’t think it would be good enough to fire me. They know me too well; they certainly should, by now. They’re trying to teach me, but instead of blackboards, they ‘ve placed cold little bosses who only hear me if I speak their language. Who won’t listen to my hands; who I can’t make do anything.” The screen now read 71 degrees. He gaped at it. “Now that’s really impossible. It is. ”
The thermometer waited.

Albert gripped the arms of his chair. “I can handle this. I can handle anything you’ve got. You can make me beg for a 5 degree drop and I’ll do it because I want it but they’re only words and I’m still here! If you’re displeased with my work, remove me from my office! Cowards! If you’re displeased that I can vomit and spit and fire neurons then I cannot help you. I am human and humans get hot, you haven’t pushed me out but I am uncomfortable, drop it to 66 degrees - drop it to 66 degrees!”

Albert’s head felt glittery from lack of blood. He could hear it tinkling around behind his eyes. “Lower the temperature to 66 degrees,” he said.

“Done, Mr. Rowe. Would you like to save 66 degrees as the default temperature of the room?”
“Yes, please.” He said yes every time.

He did need coffee now. But not a perfectly proportioned, steaming work of art. He wanted a terrible cup, made by a well-intentioned person with no sense of ratios. Someone unaware of how awful their coffee was. He smiled, (when Albert smiled it wasn’t calming, not at all, but there was something unsettling and oddly young about it), and put his desk in order.

He knew a place.

Caitlyn Waltermire writes short stories and songs as well as acts onstage and film. In her spare time, she plays with flowers.
Posted by Skinny Devil at 12:41