As many of you know, I write a column for TinFoil Music called “Guitar Gods” that has featured some awesome players and will feature many more players in the months to come. (editor's note: Tinfoil is no longer on-line, so all IG lessons and "Guitar Gods" interviews are found at Skinny Devil Magazine.) Two of those players, the Guitar Goddesses, are Jennifer Batten and The Great Kat. This month is a primer of sorts for the Kat style of playing…which is always intense! 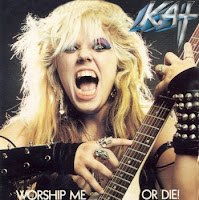 The Great Kat – who is not only an excellent shredder, but a fine composer, too – is probably best known for re-orchestrating classical music standards for shred-metal interpretation. This has included the works of Vivaldi, Rossini, Beethoven, and others, and requires a firm grasp of both speed-picking and sweep-picking, not to mention a very limber fret-hand. Primers for these techniques can also be found in the IG “Master Class” archive (care of Joel Wanasek).


This first example is actually a pretty simple lick taken from a Paganini piece, but requires proficiency in string skipping and the ability to move quickly and cleanly up and down the neck. I usually finger-pick this on classical guitar, but on electric you can choose to either hybrid-pick (down-stroke with pick on the G-string, then up-stroke with your middle finger on the E-string) or pick normally with a pick – but be sure your string-skipping technique is pristine!

This lick is a bit more difficult, as it incorporates precise trills and slides. You might also want to refer to Francesco Fareri’s monthly column “Extreme Arpeggios” given the sweep sections. The audio track is played at a slow speed, so start slow and increase the tempo as you practice. Again, be sure to play this with extreme clarity.

Be sure to visit Kat online at http://www.greatkat.com/ and check out her interview at Tinfoil here.
As always, feel free to drop me a line with any questions or comments or requests for lesson topics. I’d also like to say “HOWDY” to one of my guitar students – “Howdy, John!!! Keep practicing!”.
Posted by Skinny Devil at 13:14