I got a few calls asking me to skip the “insanity” for one lesson and opt instead for a bit of focus on classical chops. Let it be known that I am less-than-adaquate when it comes to playing classical guitar, but I thought I might at least offer up something to assist those who want to work on a few classical pieces. To that end, here are the opening few arpeggios to Beethoven’s “Opus 27, #2″ (better known as “Moonlight Sonata” or, to Ludwig, “Sonata Quasi Una Fantasia”). 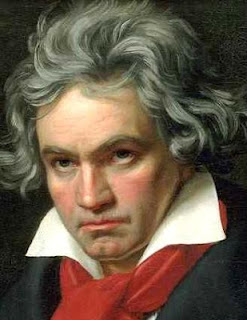 A quick tip or two regarding classical technique: Make sure your fingers are coming down on the string straight rather than at a sharp angle (as is common when playing rock guitar) and be careful with your pick-hand technique, being mindful to change the angle of attack so your hand doesn’t rest across the strings but comes down on top of them.


Start slowly with this until you get it up to speed, and be sure to shift you hand position economically. Rest strokes are a no-no, as the notes need to ring.

I originally wrote this out as triplets in 2/4 – though I’m not sure if Beethoven actually wrote it that way or as 3/4, 6/8, or something else entirely – and in the key of D minor. However, a friend forwarded me a transcription by a guy using the name “John 316″ which is in A minor and written in 8s in 6/4. This allows the upper voice to come in more easily than my original version, so I re-wrote it borrowing heavily from John. My thanx to him for transcribing it much better than I managed!

Listen
Posted by Skinny Devil at 08:25