As I was about to sit down to write this month’s lesson, I was swamped with requests for more fingerstyle stuff. Rather than skip about madly from fragment to fragment of various pieces, I decided to examine one section of the classic “Malaguena” so that we could try several variations. It can be written several ways, but I decided on the following because it lays out easier if you’re unfamiliar with the piece. 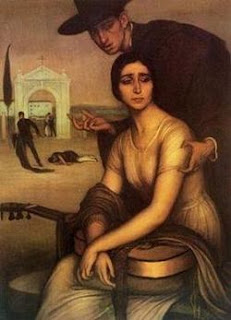 The first example is to get your fingers ready. Break this into fret-hand and pick-hand patterns. The fret-hand is simply holding an E chord and chord, while the pick-hand is playing a simple (strings) 4, 1, 3, 1, 2, 1 pattern. To keep it simple, this pattern can be broken into alternating between thumb and finger (with the thumb, or “p”, playing allstrings except 1; the first finger, or “i”, playing only string 1).

Here is a simple variation.

Play each of these very slowly, experimenting with various ways of picking the notes with your fingers…or even with a pick if you’re in need of a serious precision-picking workout!