One of the big requests I get is for “style” lessons, and among the top request in 2004 was for George “Mr. Scary” Lynch. My apologies for the delay, guys, but it’s finally here!

George burst on to the scene back in 1982 with the band Dokken and quickly became one of the most admired guitarists of the decade by demonstrating extreme technical capabilities coupled with uber-aggression, a unique approach, and lots of soulful style. With a Grammy nomination, countless tours & guitar clinics, 9 Dokken albums, 6 Lynch Mod albums, and 5 solo offerings (from EPs to full-length albums), George is firmly established as one of the true Guitar Gods. 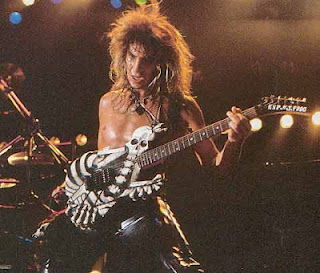 If you’ve never heard George play, try out the song “Mr. Scary” from Dokken’s 1987 release (or the 1988 live release) “Back for the Attack”, which is a veritable lexicon of Lynchisms. Like all of the style lessons,it’s impossible to give a proper treatment of George in a single lesson, so we’ll simply highlight some of his signature licks as examples of a few of the prime features of his playing. In the first example, we see George’s passion for “out’ notes, like the spooky b5.

Example 2 touches on the wide intervals George uses so fluidly (the so-called “Gothic Octave”) as well as his use of a quick sliding vibrato and touch or tapped harmonics.

Example 3 is a classic George lick…shifting slides, out notes, harmonics. Have fun with this one!

Hope this feeds your hunger for the George Lynch style a tad.

For more info on this incredible player, visit George’s web-site, where you’ll find info on his past, present & future, sound & video clips, guitar tabs, and lots more!
Posted by Skinny Devil at 19:43