Greg Howe may be most famous as the hired gun for mega-stars like Justin Timberlake and Michael Jackson, but he’s known in the guitar world as a player with impeccable chops, extraordinary knowledge, and unique musical vision. He always demonstrates clean lines with both fire and grace, and his ability to weave together tapestries of sound from often disparate genres make him a paragon of fusion. 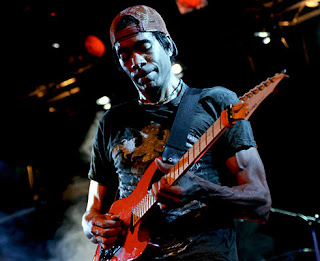 
The first two samples are taken from Greg’s debut solo release (1988’s “Greg Howe”) – example one is from the song “Kick It All Over” and example two from “Bad Racket”. These show tidbits of the stylistic roots of Greg’s development.

The last example is from 1996’s “5″. Titled “Bach Mock”, this demonstrates Greg’s passion for classical lines and picture perfect articulation.

Now, Greg has released a superb work with drum legend Dennis Chambers and bass virtuoso Victor Wooten called “Extraction” and features his most “fusionistic” work to date. The compositions are outstanding and far reaching, the musical performances miles above par, and the sound downright crystalline. Trek over to Greg’s web-site to hear sound samples.

For more tabs of Greg’s playing, visit Francesco Fareri’s web-site (Fra is a former Insane Guitar columnist) and take a look at Fabrizio’s lessons at the Insane Guitar Archive. For lessons (video or in person) from Greg, contact him via his web-site.

Also keep an eye on the “Guitar Gods Index“, as I’ve just interviewed Greg for the series and it will be published soon!
Posted by Skinny Devil at 18:20