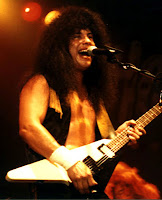 The best way I can think to describe David Neil Cline is very heavy rock with an obvious nod to his 70s and 80s music influences. This guy forges ahead with the fearless abandon of such greats as Nugent, Deep Purple, Nazareth, and the Scorpions, coupled with technical excellence that reminds me of Yngwie Malmsteen, Michael Schenker, and Rush.


Since the late 1980s, David has produced three releases - "Fit of Rage", "Malefic Influence", and the new "Thorough Scrutiny" - all available on his own record label, Gazochtagen Records. "Fit of Rage" has gone through several incarnations (the original, the re-mix, and the re-re-mix) and "Scrutiny" is receiving rave reviews around the world. Check out Cline's web-site (www.davidneilcline.com) or his IUMA site (URL available from David's "music" page on his web-site) to get more info and hear full-length MP3s of songs like "Malefic Influence", "First Reaction", and "Enforcer".

The band is off the road and in the studio working on a 4th release, and plans to tour the US and Europe as soon as the new CD is out.

With their ball's-to-the-wall style and David's phenomenal guitar playing, they are poised to make a huge splash on the music scene. The Skinny Devil's prediction? 2003 will be Cline's year! With heavy rock and the guitar solo making a comeback in popular music, David Neil Cline and his band may easily find themselves on the cutting edge if they play their cards right. I had a chance to speak to Cline recently...check it out!

I am re-mixing the "A Fit of Rage" Album one more time. Adding the original version of the song "I've been told," plus adding even two more never released songs. This will make the CD a full length CD and will sound way more punchy and powerful then the (re-mixed plus two) CD. My band and I are also working on the next David Neil Cline CD. It will be released around Fall of this year. We are already playing some of the songs live and the response has been great!!!

Well, "A Fit of Rage" is my old work?. In fact it was my first album. Just still refining it. We are tuning down a whole step to "D" on a lot of the new material giving it a much deeper and modern sound from the older material. Still heavy if not heavier. But still with real vocals and harmonies. No yelling at the top or our lungs or silly hand waving and rapping going on here! Just good old fashion Heavy Rock! I'd like to think that my vocals and vocabulary have matured considerably since the earlier material as well.

I?d have to say the lead work on the "A Fit of Rage(remix plus two)" CD and the "Thorough Scrutiny" CD are pretty comparable. I'm really looking forward to the new album. That will probably be my best work. Like most writers, I'm growing tired of my old material. It's time to do better.

I mostly play a customized flying V. I have another custom made guitar that was put together by a few different people. Everyone always calls it the Shark. It looks weird but it sounds great! Weighs a million pounds too but I like heavy guitars. That is the one that I tune down and use .011 strings on. I use Semore Duncan "Invader" pick ups in both guitars. I also have a 1973 Fender Strat. You could not ask for a better sounding guitar! For amps, I use two Marshall stacks. I swear by my old Marshall 50 watt, Mark 2, JCM heads. In fact, my other guitar player, Todd Reed, just bought one because he liked the sound of mine so much. We both use Ibanez Tube Screamers and Boss chorus units. I have a vintage Vox Crybaby Waa Waa pedal and a DOD noise gate to get rid of any hiss or noise the Tube Screamer makes. I've been using the same set up for almost 20 years.

5) Who would you cite as early influences, and who are your favorite new players?

Yes. Keep your mouth shut until you have signed on the dotted line. Then maybe still keep your mouth shut! You may save yourself some humiliation down the line. Also, sometimes the less talented guy with the better attitude and dedication is worth way more then the very talented guy with his head up his ass. If the band don't get along, it will not stay together. Be careful who you fire!

Finish the new CD album. Tour Europe and some of the US to promote the new CD. Make lotsa money!!! Meet lotsa fans!

Hey, my Cds can be purchased at my website. The site also contains free MP3s, RealAudio, bio, pic gallery, reviews from all over the world... If you would like to join our mailing list to receive our news letter, e-mail me at GazochtahagenRds@aol.com Thank you very much, man.